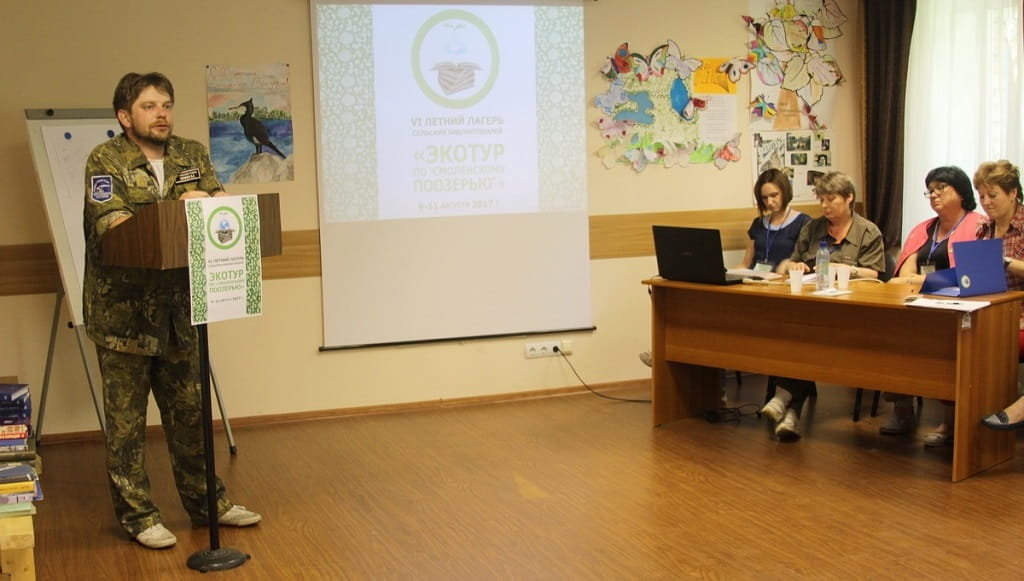 In the north-west of the Smolensk region is the Smolenskoye Poozerye National Park , which has the status of a biosphere reserve.

Head of the Environmental Education Department, Dmitry Belyaev told us about the history of the National Park, its activities and attractions.

- Tell us a little about Park, its history and activities.

- The National Park Smolenskoye Poozerye was established in 1992 to preserve and study the unique nature, culture and history of the northwest of Smolensk. By its name the Park is obliged to 35 lakes of glacial origin, located on its territory.

About 80% of Smolensk Poozerye is covered with forests, in which live many animals. There are about 250 monuments of historical and cultural heritage. Since 1999, the NP has the status of an ornithological territory of international importance. Since 2002, Poozerye has been a biosphere reserve under the auspices of UNESCO's "Man and the Biosphere" program. Also, the National Park is a member of the Association of Protected Areas of the North-West Region.

- Is permission is needed to visit the park?

- Yes, permission is needed. You can get it from the administration or the representative office of Poozerye in Smolensk, as well as in the eco-center Baklanovo or from patrolling inspectors. We plan to organize the issuance of permits and through the Park's website. Visiting the national park is paid. More information are available on the website. 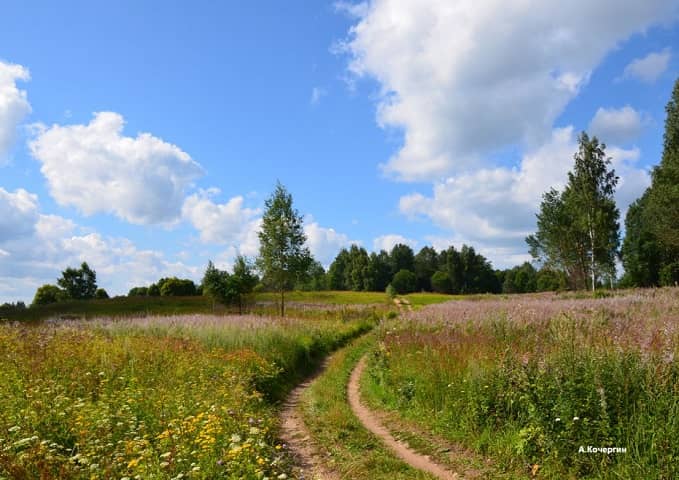 - Tell us about the activities you are carrying out for eco-education.

- These issues are dealt by a special department of environmental education, created in 2001 together with the eco-center Baklanovo. With the assistance of the Ecotourism Development Fund "Dersu Uzala", children's ecological camps were held in the Park. Unfortunately, due to a number of reasons, this practice has been discontinued since 2010.

After a long break, the first eco-school was held in our park in the winter of 2015 in conjunction with the Non-Profit Partnership "Birds and People". Now such events are held regularly during the days of winter and summer vacations. A lot of children from the nearest regions, as well as from Moscow and the Moscow region, get acquainted with us in different areas of biology and geography (ornithology, ichthyology, forest science, etc.). Based on the results of the training, they prepare the research work on the selected topic and report its results at the final conference. 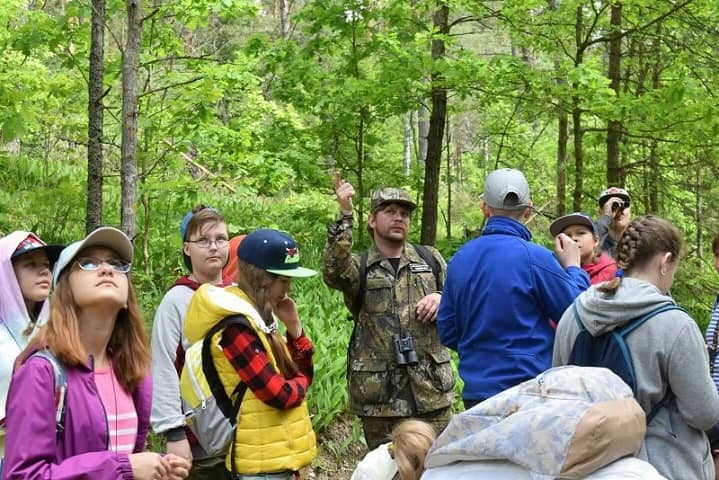 - Do you carry out environmental actions?

- The Smolenskoye Poozerye National Park constantly participates in the "March of Parks", the actions "Feed the Birds" and "The Bird of the Year". We organize events timed to ecological dates: the Bird Day, Earth Day, World Wildlife Day, World Wetland Day, and other events. They involve in the educational work a large percentage of the region population, introduce modern environmental problems and ways to solve them. Through creativity, schoolchildren join in the ecology of their native land, learn to see the beautiful in their surrounding nature.

- Are you implementing any new directions for eco-education?

- Of course! For example, we are actively developing birding. Already four times we held competitions in Smolenskoye Poozerye and Krasnoe Bor, and also helped organize them in Rudna. Participants of the competition learn how to work with the determinant and recognize the birds of their locality. Remember the bird, determining it yourself, it is much easier than just on a guided tour. The continuing interest in observing birds shows the promise of such measures as a form of eco-education. We will gladly pass on our experience in organizing birding competitions to all interested educational organizations.

We organize classical classes in educational institutions of Smolensk and the region. Our staff regularly read interesting and informative lectures about the nature and inhabitants of Poozerye, about the ecological dates and activities held in the park.

- In Russia, 2017 is declared the Year of Ecology. What is the reflection of this event in your park? What interesting happened in a year?

- This year the Russian reserve system celebrates its 100th anniversary, and Smolenskoye Poozerye celebrates its 25th birthday. To these dates, we timed the holding of a "reserved lesson" in the schools of the Demidov district. The materials of the lesson were distributed to other regions, so the "reserved lesson" was held throughout the region. Schoolchildren from Smolensk region got acquainted with the forms of the Russia protected areas, made a virtual tour of the reserves and national parks of our homeland, learned about the contribution of protected areas to the conservation of its biodiversity. Such an occupation is useful in the patriotic upbringing of the youth. After all, patriotism is not only a pride in the history of our country, but also a love for nature, a desire to preserve it.

This year was also held XIII Meeting of NP friends, where the guys from all over the region came. In February there was a photo exhibition "Where the sky is reflected in the lakes". Later it was demonstrated in Belarus and Poland. In May, an eco-path for the low-mobile groups "Poozerye without barriers" was opened, and a month later a charitable marathon "Run for the Bison" was held. We also participated in the "Artek's Reserve" dedicated to the Year of Ecology in Russia, as well as in the First Youth Forum of UNESCO Biosphere Reserves in Italy. To the 100th anniversary of the reserve system, was confined the Scientific Conference "V International Scientific Readings in Memory of N.M. Przewalski. " 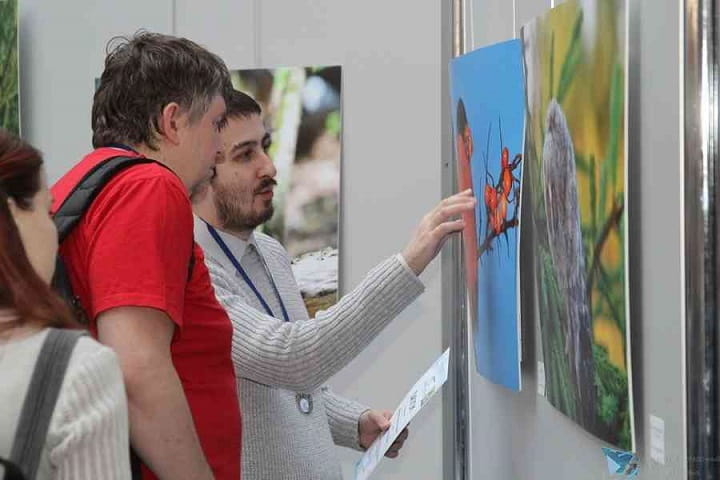 Photo exhibition "Where the sky is reflected in the lakes", фото WEB

- Tell us about the projects in which you are participating now.

- In addition to the project to create eco-trails "Poozerye without barriers" in Baklanovo, we are participating in the program of coniferous-broad-leaved forests restoration and we are implementing a project to create a free-living bison population in the territory of the National Park Smolenskoye Poozerye.

- How many employees do you have? Can you say that your team is an associate? Do you involve volunteers?

- Today there are about 80 people working in the Park: foresters, inspectors, infrastructure workers, eco-education employees ... All these are dedicated people, striving to preserve their native nature. In addition, we also attract volunteers who help the park unselfishly.

- Reserves and parks are an interesting tourist direction. What excursion programs do you offer? Do you have special programs for children and teenagers?

- We offer tours of ecological paths, laid along the most picturesque places of the NP. Also it is possible to visit our open-air complexes, where the bison and Przewalski's horses are kept. The tourist route "Along the front line" is interesting, telling about the struggle of our people with the German-fascist invaders. During the excursion, tourists stop at memorable places, and in the end, like real partisans, make a transition through the deaf forest, looking for hidden dugouts, where the underground people were hidden.

History fans can make a trip "To the history of Sloboda". During a sightseeing tour in the village of Przhewalskoe (in the past named Sloboda) you will visit the burial mounds of the Slavic Krivichi. In these places once lived the famous traveler Nikolay Przewalski, and part of the tour takes place in his house-museum. Afterwards, in the center of crafts and creativity tourists get acquainted with the life of our ancestors through master classes (dolls, ceramic, weaving craft). The day ends with a visit to the birch bark museum in the village of Anosinka, where the corner of the fairy-tale world hides, in which live forest animals and magic characters. Tourists can take part in master classes in the production of birch bark products, as well as to learn how a real windmill-poles work.

The route "To the Dead Lake", which begins in the eco-center Baklanovo, is also popular. Further, through the Robinson tour, it leads along the marsh Kolpitsky moss, through a pine forest, leads to the forest lake shore. Due to the lack of fish in it, the lake was called Dead. The route is designed for people of different ages and levels of training.

In winter we offer excursions to the forest on snowshoes. So you can get to know the traces of animals, learn a lot about the life of the winter forest and how its inhabitants adapt to the cold.

For children, interesting activities have been developed in the Baklanovo eco-center, which tell about various inhabitants of its surroundings. Very popular excursion is the wetlands exposition in the museum. Also in the spring we conduct excursions to the woodcock pull and open ornithological routes, where visitors get acquainted with the birds of our region. For children groups we offer participation in eco-schools for the period from 3 days to a week. 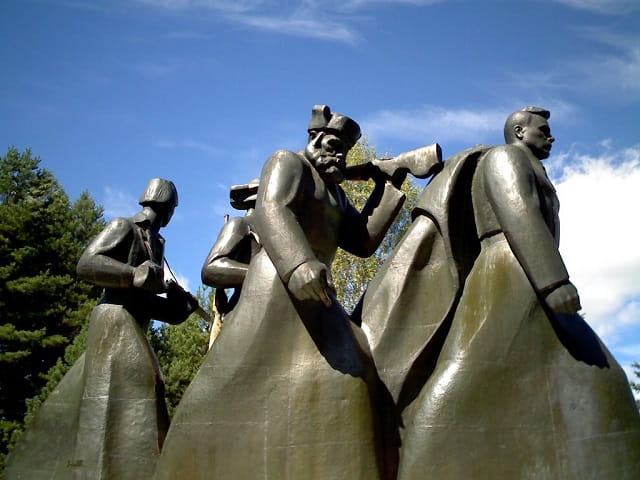 - Do you think that people revere to environmental problems today?

- With the development of technologies, the isolation of the population from nature is clearly observed. Children learn the world through electronic devices, resulting in a widening gap between man and the world of nature. This leads to a lack of understanding of natural processes and the growth of environmental illiteracy.

Most children are completely unfamiliar with their native nature, do not know that it grows next to their house, who lives in the nearest forest or field ... There is no need to speak about a minimal understanding of the structure of the ecosystem. Unfortunately, in our country still very little attention is paid to environmental problems, and the ecological literacy of the population is still low. This also applies to problems with garbage, both with saving resources, and with poaching. Often they are closely related to the socio-economic situation of the region.

Therefore, the need for eco-education of the population and, above all, of the younger generation, is more acute than ever. This is what we are doing in our park.

- Say a few farewell words to our readers.

- I would like to congratulate everyone with the 100th anniversary of our reserve system once again. To date, the country has 103 reserves, 51 national parks, 59 federal wildlife preserves and several thousands of protected areas of regional and local importance. All of them are called upon to preserve the unique wealth of our nature for future generations. I hope that in Russia after the end of the Year of Ecology, environmental problems will be given great attention, and people will become more interested in nature. Welcome to the Smolenskoye Poozerye National Park, where we always welcome guests and know how to surprise them.