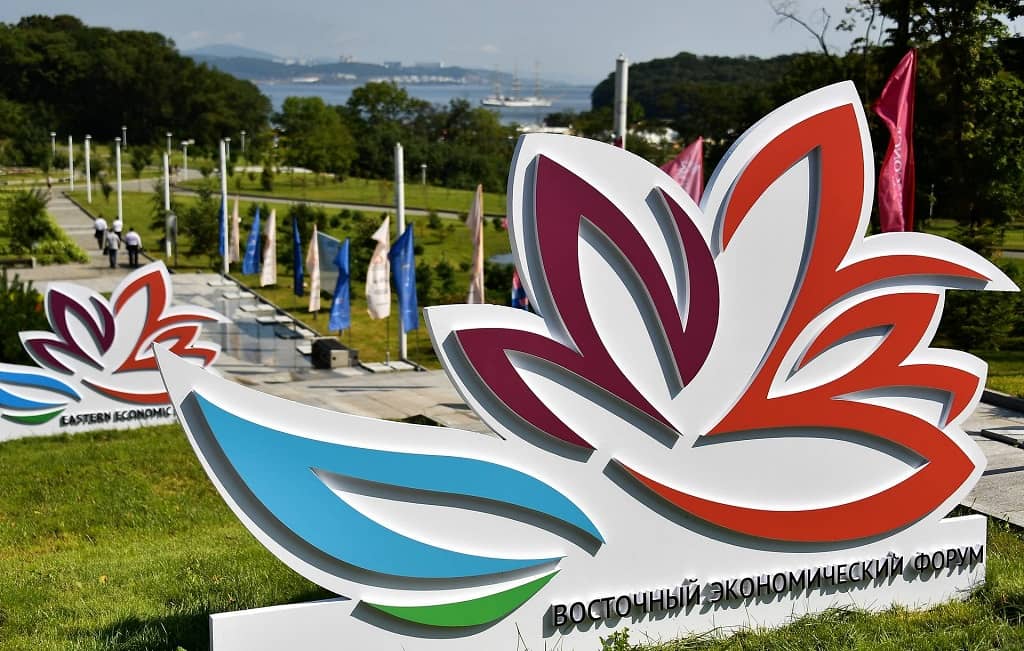 The Fifth International Eastern Economic Forum has ended on Russky Island. Over the course of three days, 90 events took place on the FEFU campus, in which 8,500 people from more than 60 countries participated. The event was covered by 1,300 media representatives. The forum resulted in the signing of 270 agreements worth almost 3.5 trillion rubles, which turned out to be an absolute record in the history of the EEF, which a year earlier had attracted 3.1 trillion rubles to the region nvestments, and even earlier - 2.5 trillion rubles.

The Eastern Economic Forum is held in early autumn every year for five years in Vladivostok. The goal of the project is to stimulate foreign investment in the Far East and strengthen economic ties in the Asia-Pacific region. According to the plenipotentiary of the Russian Federation President in the district, Yuri Trutnev, during this period a third of all direct investments from abroad to Russia came precisely to the Far Eastern region. 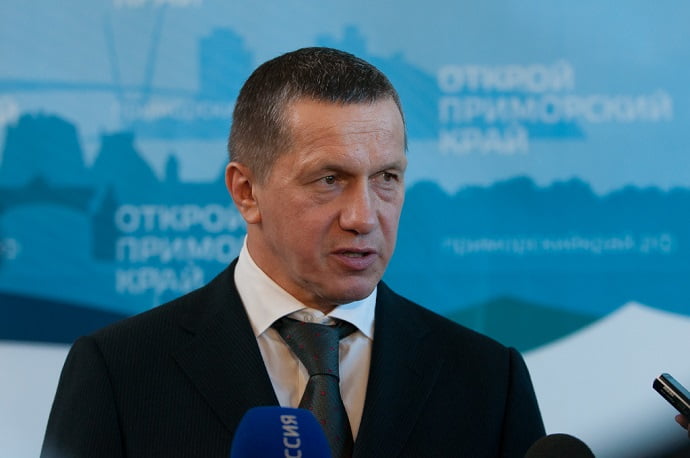 In recent years, two dozen areas of rapid development, five free ports and more than two hundred existing enterprises have been created here, which gave jobs to almost 70 thousand people. Thanks to investments in industry, tourism and urban improvement, today the economic growth of the Far Eastern Federal District is twice as high as the national average.

This time, numerous groups of delegates from Japan, India, China, Korea, as well as from the USA, England, Singapore and not only came to the capital of Primorye. The business program consisted of four blocks devoted to individual aspects of the development of the Far East. More than 400 companies participated in the sessions of the forum, but the main event of the EEF 2019 program was the plenum, in which, in addition to Vladimir Putin himself, the president of Mongolia, as well as the prime ministers of Japan, Malaysia and India participated. 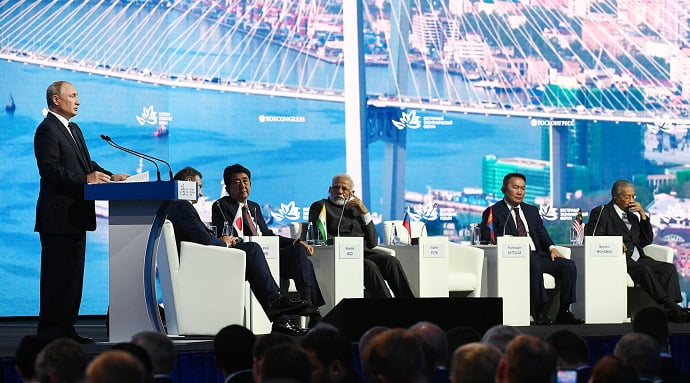 The central event was a plenary meeting with the participation of V. Putin and invited heads of state, photo WEB

In his opening speech, the President of the Russian Federation noted the active interest of investors in the projects of the Far Eastern Federal District and said that in the coming years the region should develop not only a raw material but also a high-tech one. Also, Vladimir Putin announced the launch of the Far Eastern mortgage program at 2%, which should help improve the demographic situation in the district, and supported the initiative of the head of Buryatia to increase the number of budget places in universities to reduce the outflow of youth to the central regions of the country.

Traditionally, many large-scale agreements are signed at the EEF, and the current forum has turned out to be the most productive of all held earlier. The largest amount of investments will come to the region from a company from Hong Kong - Sherwood Energy will launch a project for 740 billion rubles in Western Yakutia for the extraction and processing of natural gas. 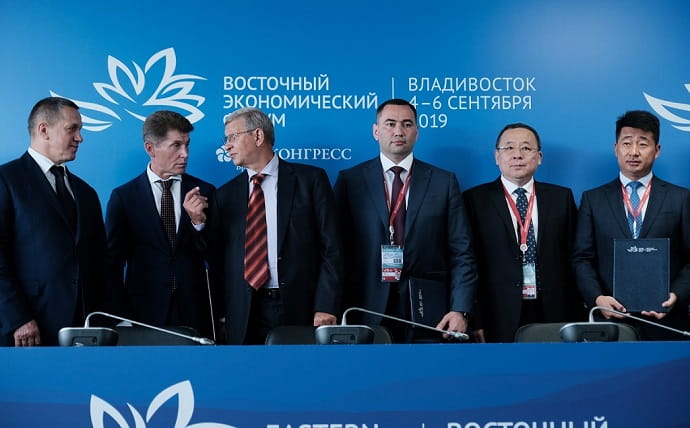 Traditionally, at the EEF sign a lot of contracts for huge amounts, photo WEB

The second by volume of investments this time was a number of projects of the Otkritie commercial bank. More than 400 billion rubles it will direct to the creation of a network of industrial parks in the region, the construction of a nuclear medicine center and a recreation camp for children in Yakutia.

According to the agreements signed at the EEF-2019, the largest investments will also be directed to the organization of methanol and ammonia production in Primorye (1.8 million tons per year), the construction of an enrichment plant at the Malmyzhsky gold and copper deposit, and the creation of a diamond complex, where will concentrate lapidary production, diamond mining company, stock exchange and other related enterprises. 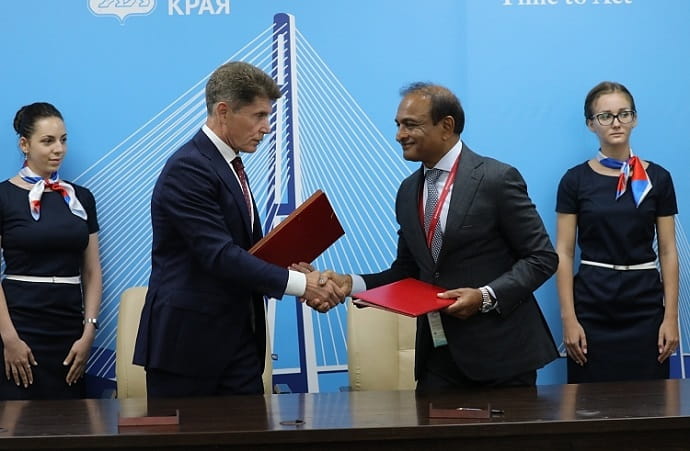 Signing an agreement on the creation of a diamond complex, photo © primamedia.ru

At the forum was said a lot about the fact that the Far East attracts more and more tourists, mainly from South Korea, China and Japan, and now a number of agreements with foreign companies have also been signed to develop tourism here. Thus, a Hong Kong holding company invests almost 60 billion rubles in the creation of the tourist complex “Asian Village”, and on Russky Island itself, the construction of an aqua park, a leisure park, industrial and IT parks, a hotel and a beach will now unfold.

To improve the transport accessibility of the region, a railway route will be laid in Suifenhe (China) and a four-lane railway network of the High-Speed Railway will cost 100 billion rubles, which will connect Vladivostok with the Russian island. 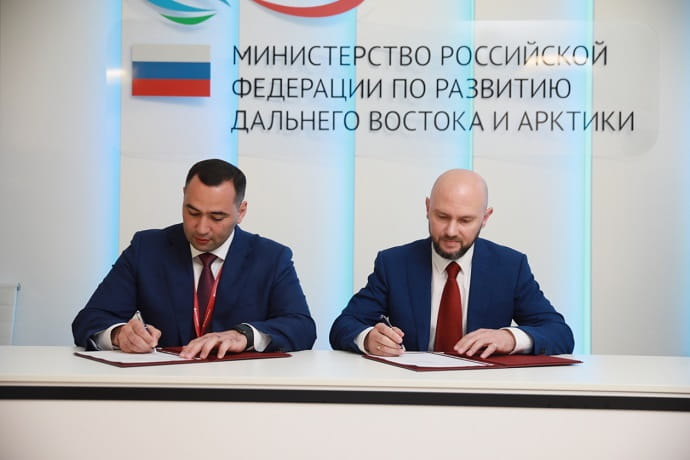 Signing an agreement on the construction of an IT park, photo © primamedia.ru

“In order to attract investors, we reduced taxation and used other tools, but still a few years ago I would not dare to expect the launch of at least 300 projects in this region. Today there are 1800 of them ... Thanks to them, the Far East has become more comfortable, economically developed and attractive for life,” Yuri Trutnev summed up the results of the EEF-2019.