Every schoolboy knows about the existence of the Seven Wonders of the World. However, to see a real miracle, it is not necessary to go to Rhodes or Egypt, it's enough to guess the time and go to St. Petersburg. The cultural capital of Russia, where travels all year round come to see the Hermitage, Peterhof and the opening of drawbridges, in the beginning of summer surprises Russians with a season of white nights.

In the phenomenon, which has received the name "white nights", there is no mysticism or romance. This is the period when at night sun is above the horizon line at an angle of approximately 6°. Therefore, the night becomes light and romantically twilight. 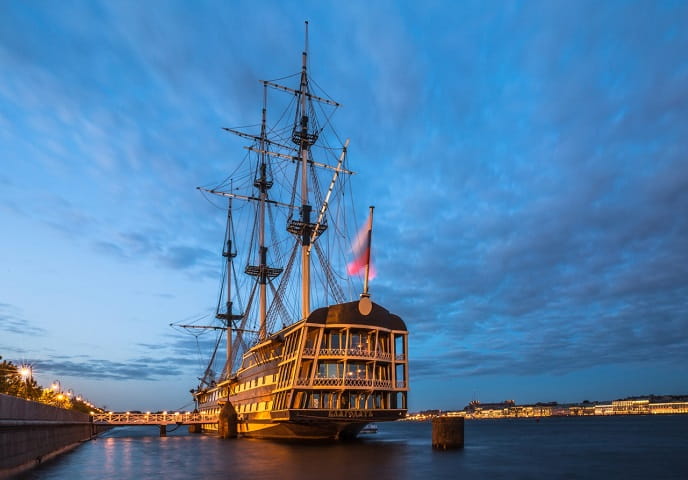 In St. Petersburg, the season of white nights starts in June, photo WEB

Many tourists who decided to look for the first time on "the day at night" are wondering when this year the beginning of white nights is expecting in St. Petersburg. And here it is worth noting that unlike the change of seasons and Easter, this phenomenon in the northern capital from time to time begins at the same time. In St. Petersburg it will last three weeks from June 11.

This is a special season for the city, when tourists come from all over the world to the city. Given that the season of white nights in St. Petersburg comes at the beginning of the holidays, in order to comfortably relax, you will have to worry about everything in advance. In the city there are plenty of hotels and mini-hotels, but it is better to make a reservation ahead of time, if there is no desire to pay more than two or even three times more on arrival. 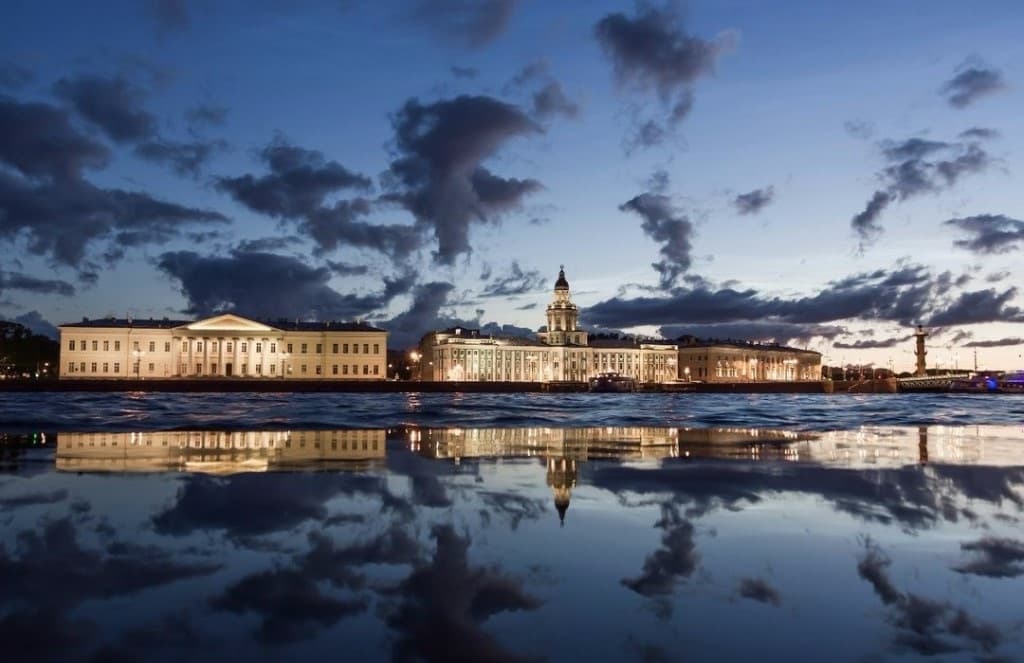 For the first time in St. Petersburg during the white nights, you should always see the opening of drawbridges. There ai enought light at night to not only distinguish everything that is happening, but even take pictures of it without a flash.

Some bridges are opened for several hours, others - an hour and a half, and therefore, slightly shuddering, with a cup of aromatic coffee in hands, you can watch the ships navigating the dark Neva and wait for the closing spans to re-connect the newly separated halves of St. Petersburg. 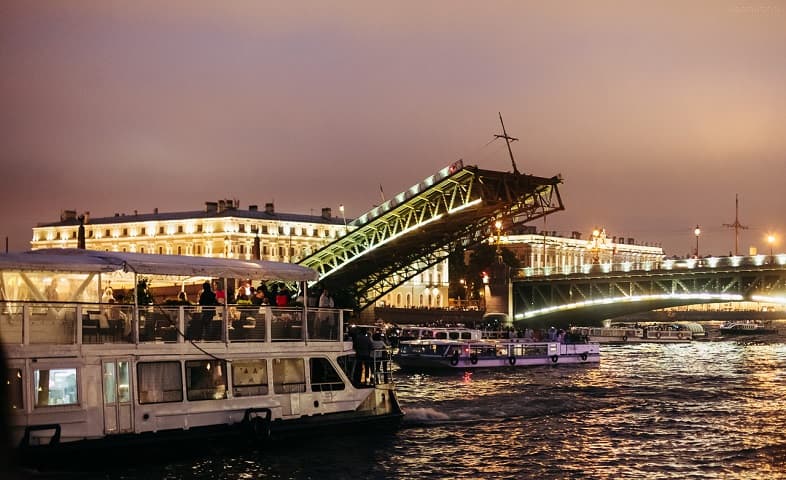 Everyone should see the opening of drawbridges, photo © Geometria

The city is ready to provide a wide variety of entertainment in this period. Steamboats, bus and foot excursions, thematic events in small private institutions and global city-wide.

At this time you can visit the Festival of the White Nights, offering connoisseurs of beautiful concerts of symphonic music, ballet and opera. A great popularity is enjoyed simply by the enchanting spectacle "Scarlet Sails", organized for graduates of schools. To admire the beauty and scope of the event can be from the embankments, and from the deck of steamers. 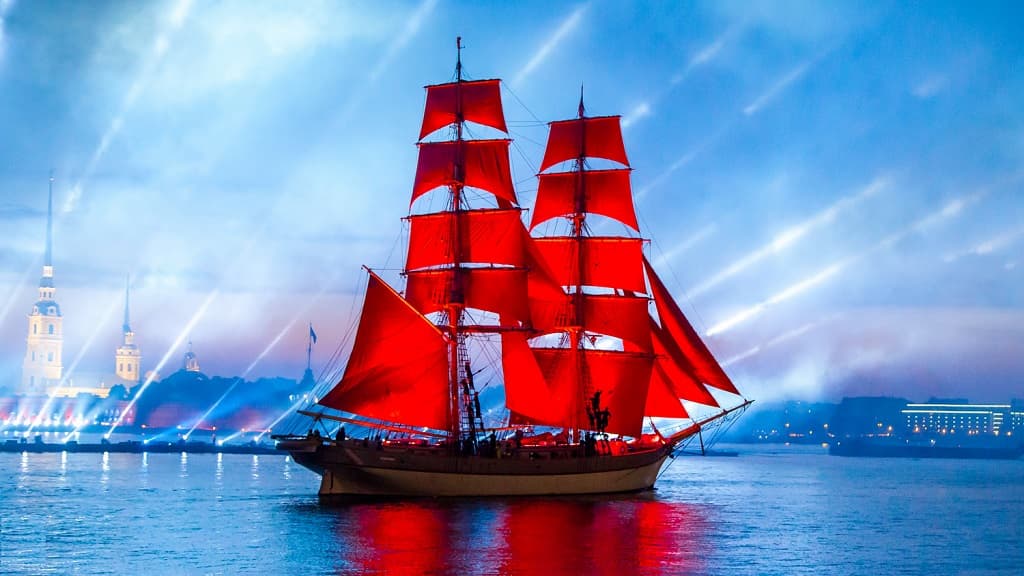 It is worth noting that in 2018, not only in St. Petersburg, you can admire the white nights. This phenomenon is even more striking in the cities located to the north - in Murmansk, Yakutsk, Arkhangelsk. There the white nights are gradually replaced by another, no less surprising phenomenon, - the polar night.

However, St. Petersburg is a city with a rich history. Its amazing cultural heritage, interesting architecture and special charm in the air undoubtedly beckon guests more than other places. 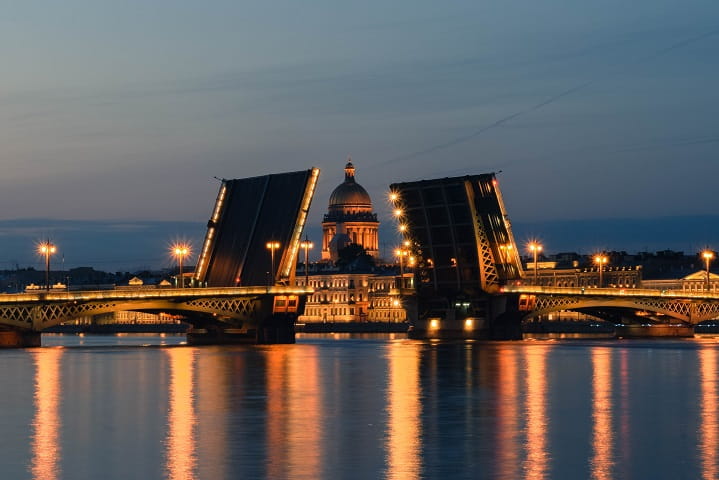 St. Petersburg is a city with a rich history, photo WEB

There is no doubt that the white nights in St. Petersburg in 2018 will again present to the citizens an incomparable sense of delight, an irresistible desire to walk until the morning and dance on the embankment to the accompaniment of street musicians. At this time it is impossible to doubt that the magic is absolutely exactly roaming around somewhere. Do you want to be in a fairy tale for a while? Pack a travel bag - the city on the Neva is already waiting!