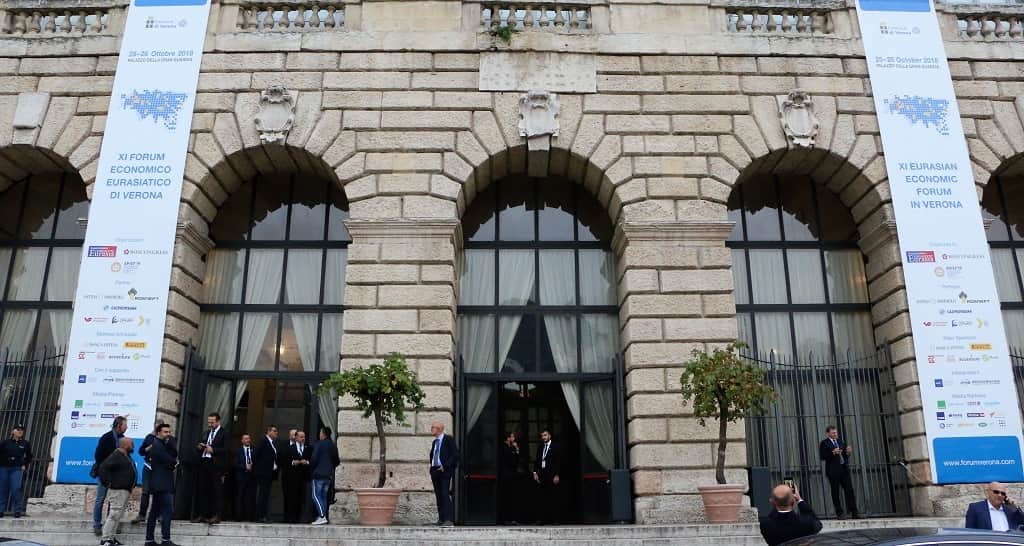 Forum in Verona: learn to trust

Back in September, the Prime Ministers of Italy and Russia, Giuseppe Conte and Dmitry Medvedev, all key ministers of the two countries, ministers of the Eurasian Economic Commission, and the first players in the energy and economic spheres of the countries of Eurasia were going to visit the Forum. But then it turned out that the meeting of Conte and Putin will take place on October 24th. Immediately after it, flying to Verona will not be easy, because the Forum began on the 25th in the morning. As a result, not a single Russian minister flew to it, and although everyone waited until the last for Denis Manturov, he also could not attend.

Of those who were at the reception at Vladimir Putin and at the Forum in Verona, it was possible to mention the head of Rosneft, Igor Sechin, Ambassador to Rome Sergey Razov, Ambassador to Moscow Pasquale Terracciano, shipowner Gianni Barbaro (group Pietro Barbaro) and a few dozen people. 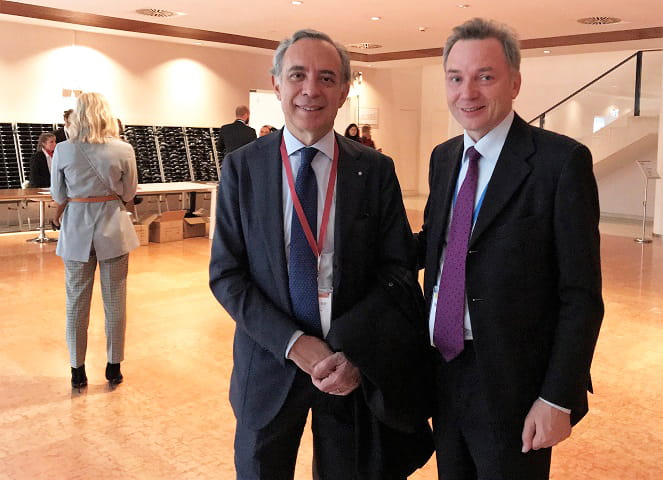 The Forum was opened by Deputy Prime Minister of Italy Matteo Salvini, who always treats Russia with special warmth, and feels at home in Moscow. The head of Rosneft, Igor Sechin, read a greeting from Vladimir Putin. Then the mayor of the city of Verona, Federico Sboarin, recalled that at the Arena not long ago, on October 6, for the first time in Europe, "Romeo and Julie"' ice performance was brilliantly performed by Ilya Averbukh, and repeated that Verona was always happy for the Russians ... And the Forum began its work. It gathered more than 1,300 participants, representing about a thousand companies from 40 countries.

Igor Sechin, in his report, focused on the sanctions, more precisely, in his words, the "treasury wars" waged by the United States. The entire economy suffers from the latter - according to the estimates of the leading world economists, trade wars will cost the world GDP 0.5–0.8%, i.e., about 400–700 billion dollars a year. The end user is threatened with a 10 to 15% increase in costs. Sechin accused the United States of "becoming the brake of the world economy engine." 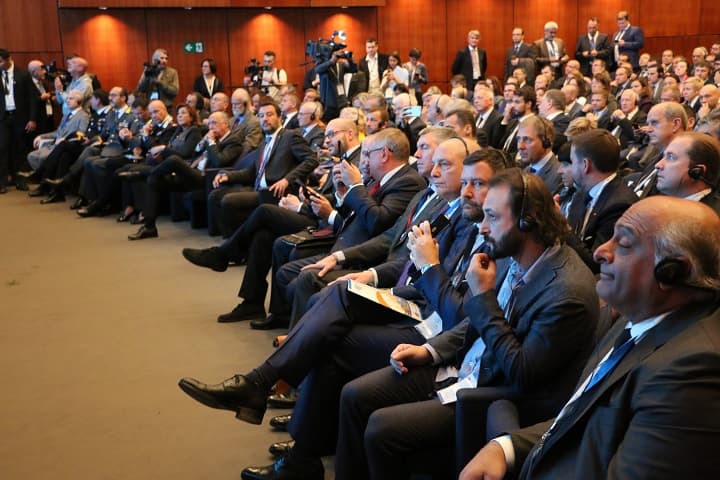 More than 1,300 participants came to the Forum, photo © Evgeny Utkin

Moreover, the States use sanctions to their advantage, and to other allies - to the detriment. "The United States accounted for only about 0.6% of the losses from the sanctions imposed on Russia, while Germany accounted for as much as 40%", Sechin said. European countries will also suffer as a result of refusing to do business in Iran because of sanctions. “In such conditions, the only advice I can give to our partners is to be ready for dictation. The result of the policy of unilateral sanctions will be the loss of a significant part of sovereignty and control over its economic and energy policies by many market participants”, the head of Rosneft predicts.

After such an introduction, the words that Rosneft is an efficient company (which is expressed not only in the good cost of oil production, but also in compliance with environmental standards) and tries to become a world leader could not produce the desired effect. The main thing is that in 2030 three leaders in oil production will remain in the world - Saudi Arabia, the United States and Russia. 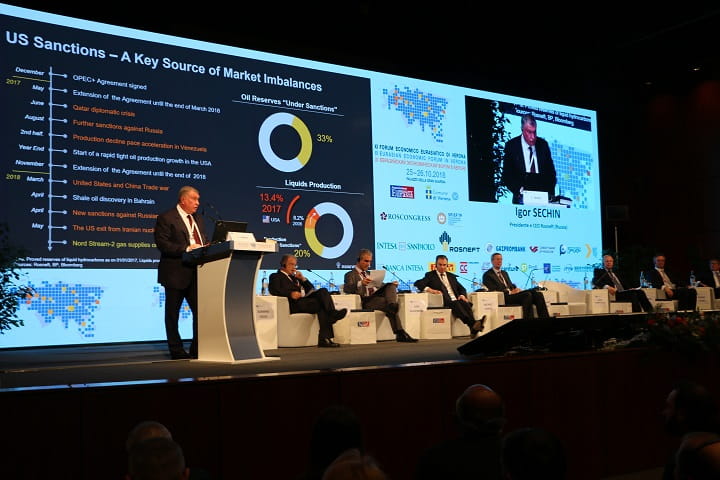 Elena Burmistrova, General Director of Gazprom Export, said that in 2018 European contract customers could take up to 205 billion cubic meters of gas. “At the moment, we have customers' requests in the medium term for an additional volume of gas of about 50 billion cubic meters per year”, Burmistrova notes. Therefore, Gazprom has to build new gas pipelines, such as the Turkish Stream and Nord Stream 2.

The former head of the European Commission, Romano Prodi, agreed with Sechin that the European countries are losing from sanctions. And if Russia can somehow compensate for the imposition of sanctions by turning to the East, then Europe does not have such an opportunity, and it is moving towards to economic self-isolation. According to the Russian ambassador to Rome, Sergei Razov, relations with the European Union have reached their lowest point, at least since the collapse of the USSR. But relations with Italy remain positive, as evidenced by Prime Minister Conte’s official visit to Moscow. It has been 16 years since the Italian Prime Minister visited Russia for the last time. 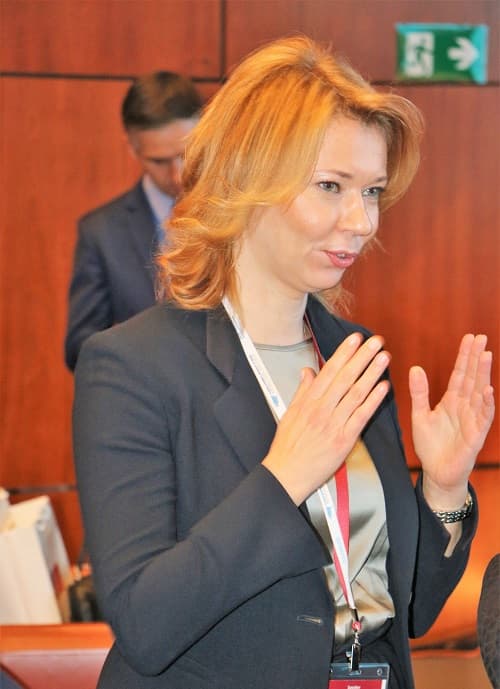 In turn, the Italian Ambassador to Moscow, Pasquale Terracciano, said that at the last European Council, Prime Minister Conte proposed to activate the EBRD fund (European Bank for Reconstruction and Development) to provide 300 million euros for Russian SMEs as export credits. Thanks to their participation in the BEI project (Bank of European Investment) and private investment banks, they can reach up to 1.4 billion euros. “This tool was frozen in 2014, but it is important to support the export of our companies”, notes Terracciano.

SACE CEO Alessandro Decio noted that Russia is a very important market for Italian exports, which should return to growth by an average of 4.4% per year from 2019 to 2021. His agency is trying to help the development of Italian exports for the Russian industry and infrastructure as much as possible and is considering projects for a joint business of 3 billion euros. 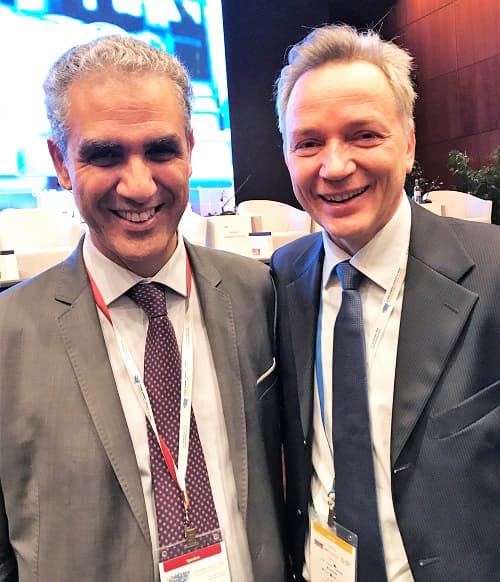 Closing the Forum, Professor Antonio Fallico, Chairman of the Directors Board of Intesa Bank, said that he would appeal to the Italian government to vote against the extension of sanctions in December. But Prime Conte responded at a meeting with Putin that Italy considers that all European partners must move in the same direction. “Therefore, we would not like to make a decision now. We will do it in due time. Italy is very ambitious and would like to convince all other partners that dialogue is the best way to reach a solution”, said Conte.

Rejecting diplomatic politeness, it can be translated as: "Sorry, but now we will not vote against."