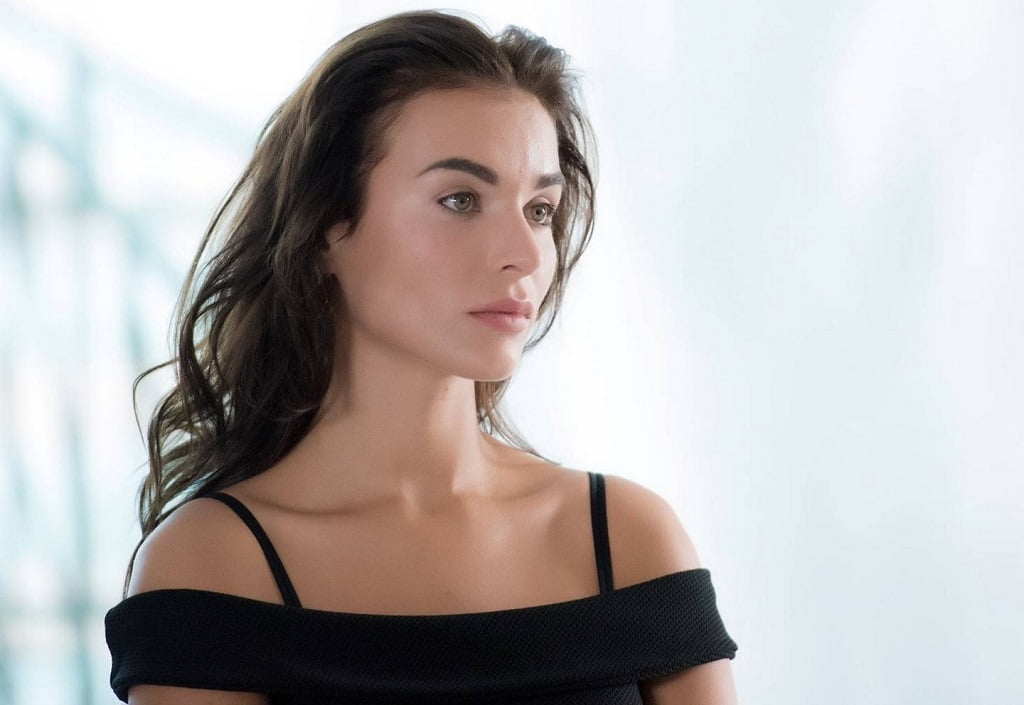 New seasons of the series "Kitchen", "Sea Devils", "Olga", the films "Take a hit, baby", "Filatov" ... These is only a part of the famous film projects in which the talented actress Ekaterina Vladimirova participated.

- Your childhood, youth and student years ... What do you especially remember those times? Which of these periods of your life do you miss most? Share a couple of bright memories that remain at the moment ...

- I remember those times in my yard company. As a child, I spent a lot of time in the yard, played cossack robbers, hopscotch, hide and seek, jumped around garages and from garages, ran around with nettles for boys, firecrackers and burdocks. Absolutely restless child! It was impossible to get me home.

I was constantly in children's camps, apparently my mother was already afraid of sending me out into the street. At least I was under supervision there. I started with the younger detachment, and as a result, I was a counselor in one of the seasons. I was in charge of the smallest detachment of 6 and 7 years old. Cool childhood was. We are probably the last generation who spent their childhood so ...

My mom grew hot red pepper in a pot. My friend and I were at my doorstep, and I decided to joke her. I ate this hellish pepper with completely unflappable face. “This is unrealistically delicious,” I said, “Mmm ... The real taste of strawberries.” Nastya also ate ... After that we galloped to the sink, tried to get drunk with ice water and made it even worse.

And once my friends and I went out to smoke on the balcony in October or November, I don’t remember exactly, but it was already cold. The balcony door slammed shut. I had to throw a piece of paper to a neighbor with my mom’s phone number. I think you can perfectly imagine what happened to us later. There are many cases and memories, since childhood was bright and full. 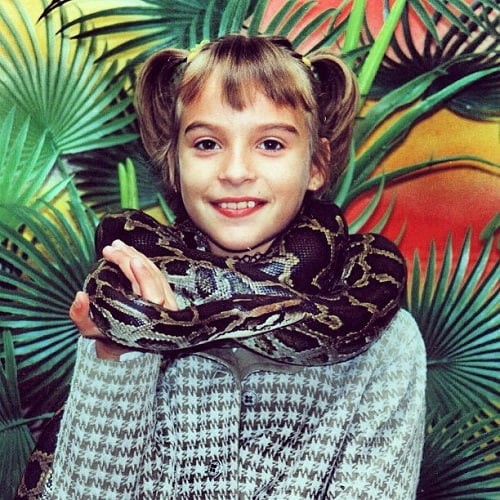 - To become an actress! When and how did you come to that choice? Were there other options who to be?

- As a child, I went to theatrical cources and loved to dance: I dreamed of becoming a choreographer. After a back injury, I entered the University of Architecture and Civil Engineering, due to many persuasions from my parents. But my creative nature could not be appeased, and after a while I left for the capital at all. I worked in the office as a PR manager and manager. I once had my own brand and sportswear business.

- Why are you so hooked with acting profession? What is its uniqueness?

- It's like a drug. I hear: “Camera. Motor. ”, And the heart begins to pound. Some kind of crazy adrenaline rush. Here you can live a completely different life, try yourself in different roles, feel yourself in the different skin. To be just different.

This profession is one of the most socially significant. It participates in the formation of the future generation, its development and education. Actors can convey their views on life, philosophical position to the mind and soul of the audience. When you find yourself on a new set,it is almost always a different crew, although the movie world is not so big, and you occasionally meet people from previous shootings. I want to say that this is very cool: new people, new emotions and I'm not afraid of the word, new family! Especially if it's an expedition.

My last small expedition was in Sochi on the set of the well-known series "Kitchen". The whole crew was located in one hotel and I literally ended up in a camp, just for adults. As if for a moment I returned in childhood! Apparently I'm a real extrovert, I like people!

The creative process! “Here you can live a completely different life!”, photo © vladimirovaes

- The main difficulties of acting that you have already encountered are ... How do you overcome them?

- Complete despondency and apathy when there is no filming. The creative path is not only white, but with black stripes.

It seems to many people that this is one of the simplest professions in the world. “What is difficult ?! Stand on stage or set and deliver pre-learned cues. Learned the scene, played and left. You’re not working at the factory. ” But how to look for a character? Work on his plastics, technique, gait and manner of speech? An actor is erudition, horizons, invaluable emotional experience, self-mastery at all levels and constant work!!! Here, one can probably even say this: an actor is not a profession, but a way of life.

- A few useful tips for those who are just planning to start their acting career!

- If vocalists sing, choreographers dance, and musicians play instruments, then the actor must be universal and be able to do everything. After all, the more versatile talents you have, the more chances you become a popular artist. Yes, and talent alone is not enough, you need to work hard. An actor is, first of all, a workaholic!

So work, friends, work! Every day you should do at least something that brings you closer to your dream! And never catch a star. I can not stand such actors, it is simply impossible to communicate with them. They carry only negative emotions, and it is very difficult to work with them. Do not lose heart and do not stop! Even when it’s very difficult, go all the way! Make your dream come true! If you want to be an actor - work hard! Always keep yourself in good shape and do not be distracted by various parties. Then take a rest. It seems to you that you have a lot of time ahead, but in fact it is not. 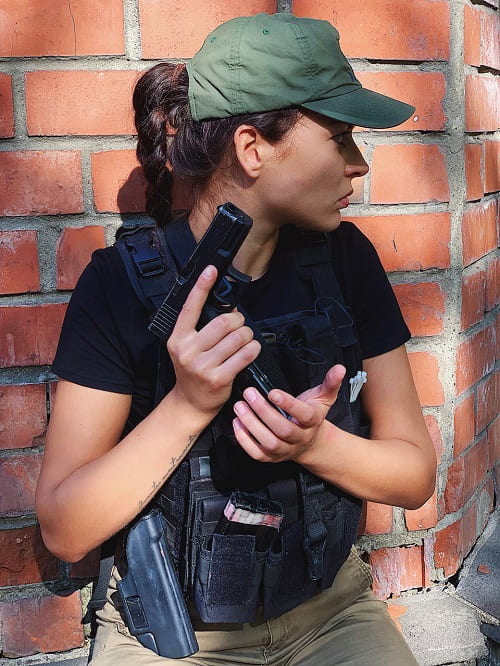 - Tell us about the roles in projects that have already been released with your participation. What genre were films and series? Who were your heroines, what is your attitude to them? What have you acquired, to a greater extent, during all those shootings? What did these roles and films teach you?

- The most striking role in already released films is in the film “Take a hit, baby.” I played twins - two completely different heroines. Firts sister was boxer's, a certain Tyson in a skirt. The second sister was femininity and seriousness. Many memories associated with this wonderful and kind comedy. I love this movie, no matter who says anything about it. It was difficult for me on the set, and I didn’t hack it at all. 5 months before the start of filming, I had surgery on my spine. I had a choice - to refuse filming or to be closer to my dream. I chose a dream. I am with character, and only thanks to it I have certain achievements, albeit small ones so far.

But after this movie, my mistake happened. After the premiere, for some reason I thought that everything was already in my hands: since I already have the main role, no, two main roles, then the acting future is already in my pocket. I sat and waited for calls, but there were none. Now I remember this with a laugh.

Dear young actors! Nobody is waiting for you, and nobody cares about you! Each year, the actors are becoming more and more - a huge competition.

- New projects with your participation ... How many are there at the moment? Tell a little about these films and series: characters, time and places ... Why they are worth seeing? Who are your heroines ...? Uncover the secret!

- 2019 was a productive year for me. Six projects per year. From the episode of the series "Olga", where I played blind, to the main female role in the British film Enemy Lines. In this project, I played a Polish partisan named Sarah. The action takes place in 1943 in occupied Poland, which is based on real events. I starred with British, Polish, Belarusian and Russian actors. Among them are Ed Westwick, Tom Wisdom, John Hannah, Pawel Delag, Andrey Karako, Kirill Pletnev, Vladimir Epifantsev. It is worth a look, since at least a very interesting acting ensemble has turned out. 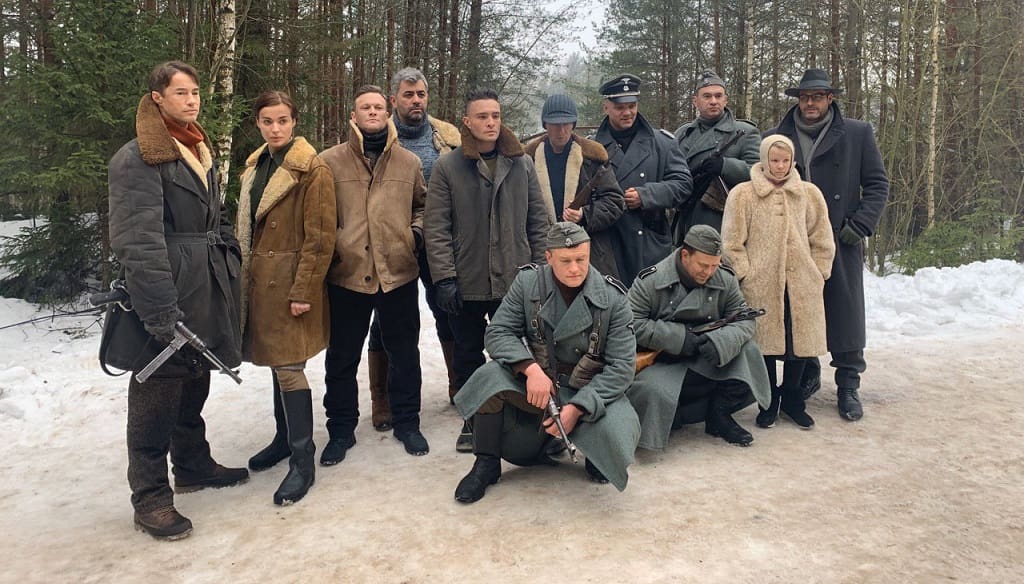 - The role of the dream ...? Which character would you play with pleasure in the near future? Are there any characters, storylines, heroes who are completely "not close to you"?

In general, everything that is connected with history catches me very much. My dream is to play Margarita from the well-known work, Bulgakov "The Master and Margarita." 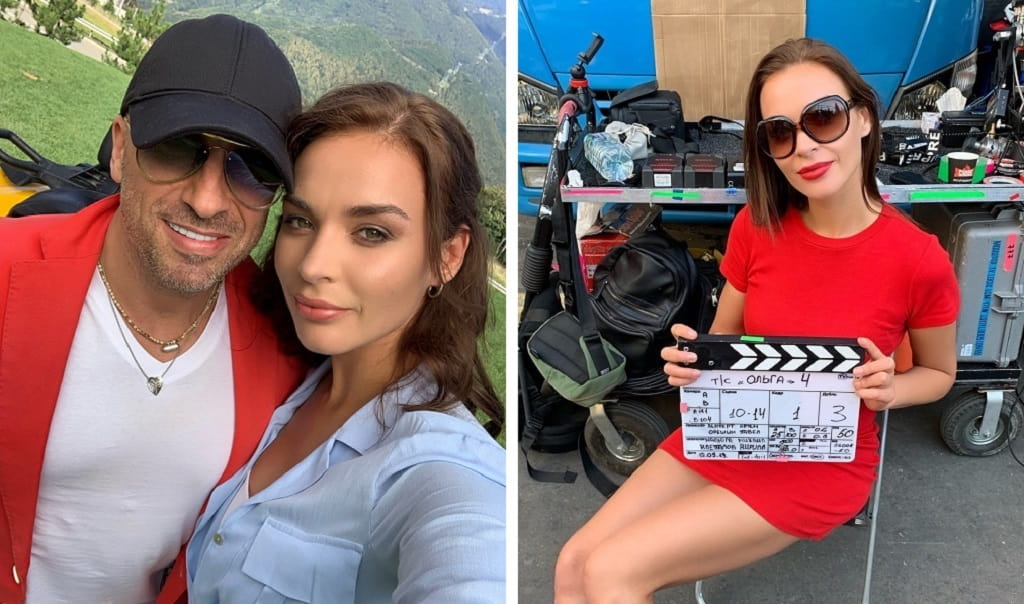 Ekaterina and Dmitry Nagiyev on the set of the series "Kitchen. The war for the hotel " (lto the eft), shooting the television series" Olga " (to the right), photo © vladimirovaes

- Music and literature. What is this for you? TOP 3 tracks of your media library ... What genres do you like most? What musical discovery have you made for yourself lately?

- My TOP 3 at the moment is: PJ Harvey - The Wind, Leonard Cohen - You Want It Da and Fleetwood Mac - The Chain. I can listen to these songs on repeat. Very often I listen to hip-hop, because under it I can do sports very well.

- The role of travel and sports in your life ...

- I visit the gym several times a week and always try to diversify my workouts. Fitness, boxing, swimming and dancing. A little bit of everything. I travel when there is a possibility.

Ekaterina is always trying to diversify her workouts, photo © vladimirovaes

- How much time do you manage to devote to reading books? Do you have favorite authors, works and characters?

Favorite books - “The Master and Margarita” by Bulgakov, “Mysterious Island” by Jules Verne and “Goldfinch” by Donna Tartt. Still, do not believe it, all parts of Harry Potter! I read them all excitedly (smiles). I really like the books of Stephen King, James Headley Chase and Agatha Christie. I do not have such books with which I could surprise you, and there is no such task. 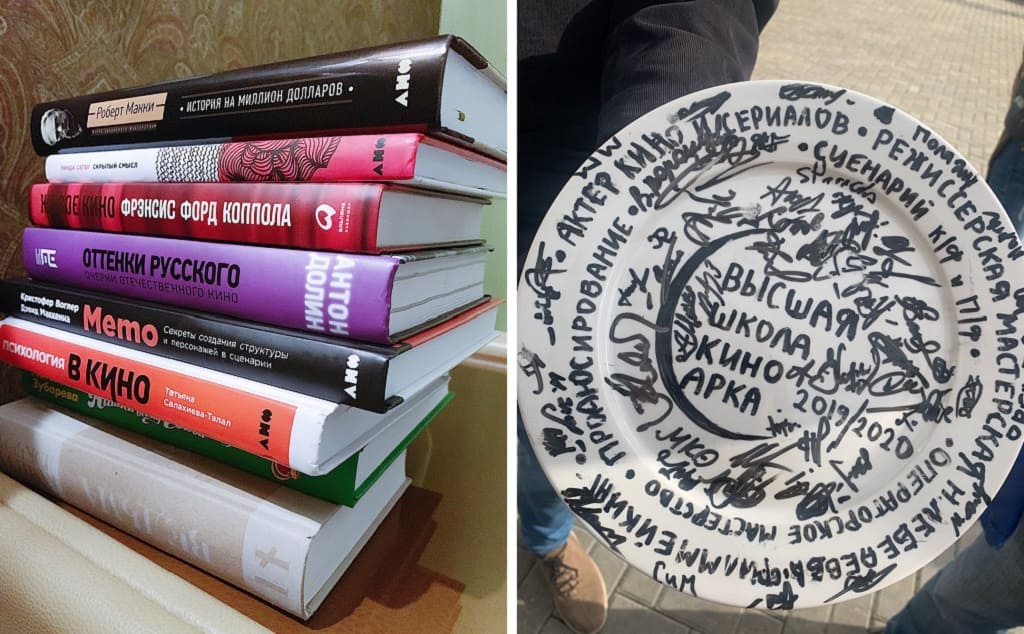 Ekaterina Vladimirova continues to develop herself daily in the art of the film industry, photo © vladimirovaes

- Briefly about your career plans! When to wait for the release of new great projects with your participation?

- Grandiose plans! But as they say: "If you want to make God laugh, tell him about your plans." I want to fully integrate into the film industry. To shoot, act and be in work. This year the series "Kitchen" will be released. The next are Olga, Filatov, Sea Devils and Enemy Lines.