120th Anniversary of the Suvorov Cross in the Alps

This year, all history lovers mark an important date that unites Russia and Switzerland. 120 years ago, on September 26, 1898 in Switzerland, in the Shollenen gorge (canton Uri), near the famous "Devil's Bridge", was a solemn opening of the monument "Suvorov cross" in memory of the Alexander Suvorov associates, who died in crossing the Alps in September 1799.

The monument was built thanks to the efforts and money of Prince S. M. Golitsyn (1843-1915), a representative of the oldest Russian family. 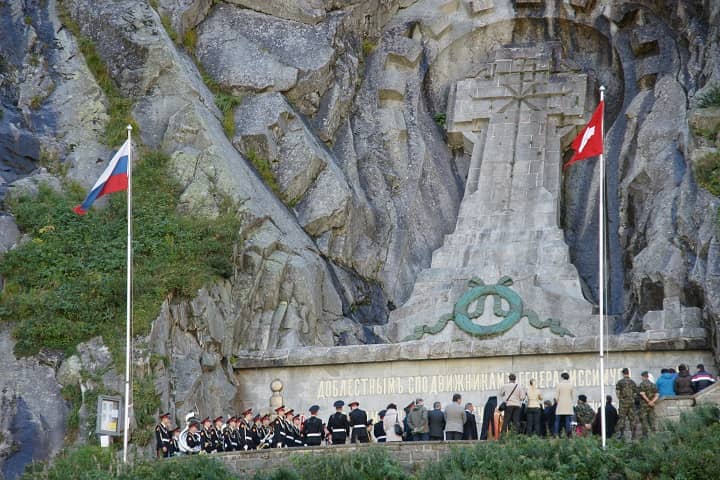 Prince S.M. Golitsyn took all the costs of designing and constructing this huge monument in the center of the Swiss Alps, which lasted several years. The architect of the project was academician A.N. Vekshinsky (1859-1908) from St. Petersburg, and the execution of the most complicated construction works was followed by the Swiss engineer Richard Chokke, the builder of the mountain massif fortifications was Saint Gothard. The opening ceremony took place in 1898. It passed very solemnly and in a friendly atmosphere. Local residents were especially struck by the dedication of Prince SM. Golitsyn, who not only financed the construction, but personally came to Andermatt to monitor the performance of the work "both in the snow and in the rain".

The history of the monument is still remembered in Switzerland, that's why this exhibition "Prince Sergey Mikhailovich Golitsyn, benefactor and philanthropist, on the 120th anniversary of the monument to Suvorov in the Alps" is dedicated to this date. It was opened on September 17, 2018 in the Swiss Museum Swissminiatur and the Swiss Foundation Kodra in Melide. 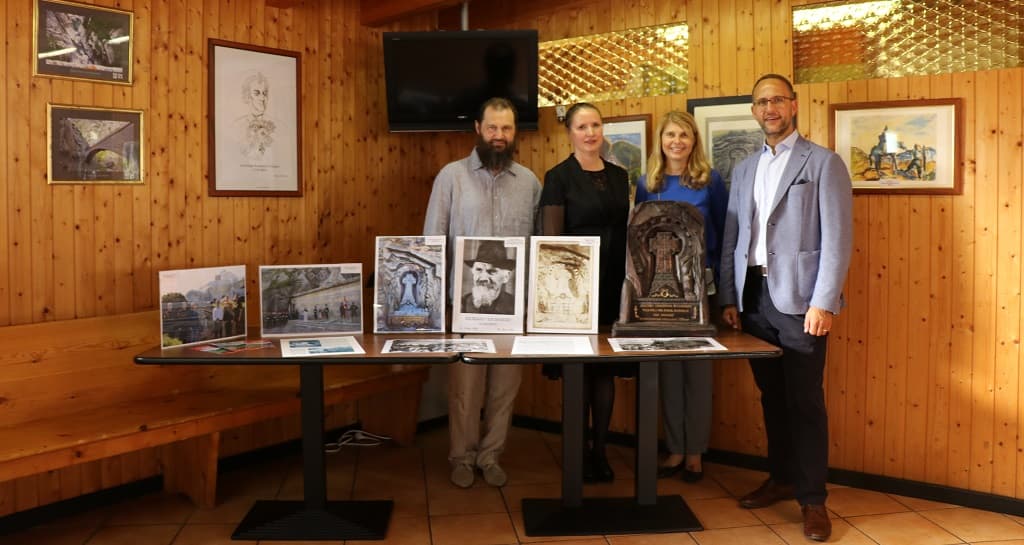 The exhibition, held in conjunction with the State Memorial Museum of A.V. Suvorov, introduces visitors the history of the monument, and tells about the life and charitable activities of Prince S.M. Golitsyn, including the Golitsin Museum, part of the paintings which became part of the Hermitage collection and about the estate of Kuzminki (one of its architects, the architect from Ticino - Domenico Gilyardi), as well as the prince's interest in the Suvorov theme.

The exhibition presents historical photographs from the archive of the A.V. Suvorov State Memorial Museum in St. Petersburg, and didactic material from the Andermatt Local History Museum, which local residents still call "Suvorov's House", there housed the headquarters of the Russian army in 1799. 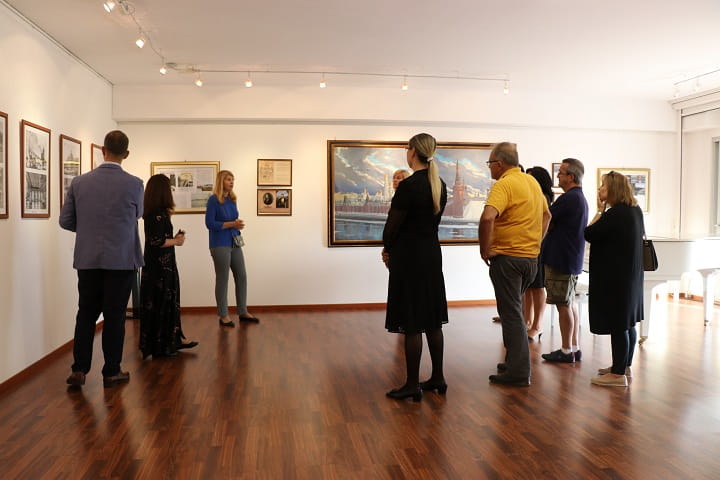 Also visitors can get acquainted with the works of the Russian-Swiss artist Alex Dolle, photos by Giulia Ilina, Maria Shichkova, Natalia Sivacheva, Andrey Strelnikov, as well as posters and portraits of the painter from St. Petersburg, Sofia Shichkova.

The real decoration of the exhibition are paintings by the famous Russian artist Ilya Glazunov, a great lover of Russian history and a participant in the ceremony in honor of the centenary of the Suvorov cross in the Shollenen gorge in 1998. It was then, 20 years ago, in 1998, the tradition of celebrating a memorial service for deceased soldiers was resumed after a long pause caused by the 1917 revolution and, accordingly, a completely different ideological approach to history.

In 1998, for the centenary of the monument opening came a large delegation from Russia, headed by the Chairman of the Russian Federation Government V. S. Chernomyrdin (1938 -2010). Metropolitan of Volokolamsk and Yuryevsky Pitirim (1926-2003) performed a funeral litany for the soldiers who died during the Swiss campaign of 1799. The ceremony was attended by Baron Edward Faltz Fein, who recently turned 106 years old. The Baron for many years actively contributed to all kinds of Suvorov events in Switzerland, including the arrival of the Suvorov Schools Cadets. 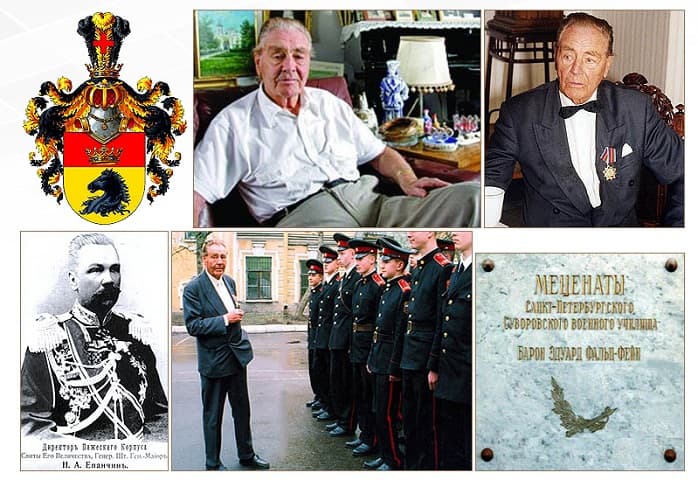 After a solemn trip, Viktor Chernomyrdin said that "the young people from different countries who gathered on the 100th anniversary of the monument made an attempt to pass the route that Suvorov passed with his troops, but this was only possible for our cadets of the Suvorov School." For 20 years much has changed. Today the Suvorov route in the Alps has the status of a "historical route of Switzerland", and all details of it can be found in tourist booklets, as well as with other places of interest in Switzerland. 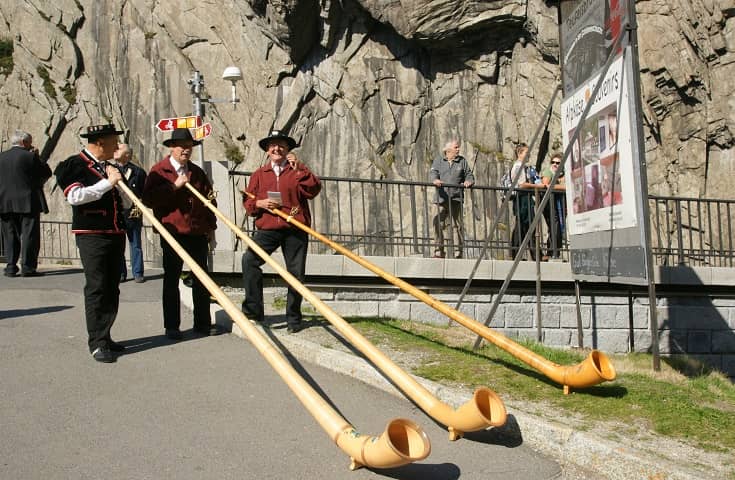 On September 17, 2018 at the opening of the exhibition "Prince Sergei Mikhailovich Golitsyn, benefactor and philanthropist, on the 120th anniversary of the monument to Suvorov in the Alps" performed curator Giulia Ilina and artistic director of the Swiss Foundation Kodra Maria Pacolli.

In addition, Dominique Vigner, representative of the Swissminiatur park-museum, stressed the importance of holding such cultural events with the participation of the Russian-speaking community, since the Ticino canton has close historical links with Russia, starting with the activities of the Kremlin architect, Pietro Antonio Solari from Carons, until the recent release of the book in Russian by the famous director and screenwriter from Lugano, Daniele Finzi Pasca. 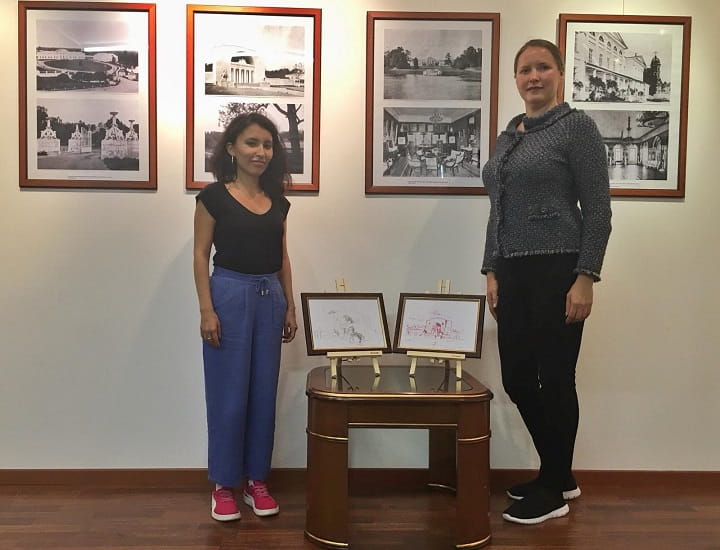 Ancient photographs of Kuzminki and paintings of the famous pavilion of D. Gilardi, painter A. Dolle at the exhibition at the Kodra Swiss Foundation, photo © Giulia Ilina

The opening ceremony was also attended by representatives of the Russian-speaking community of Ticino, and specially for this occasion the disciples of the Russian school "Shkolnik", under the guidance of the teacher Elmira Abdrakhimova, made beautiful drawings devoted to the Alpine expedition of 1799.

Hieromonk Sviatoslav, rector of the Church of the Intercession of the Blessed Virgin Mary in Melide, stressed the importance of historical memory. The opening was also attended by Federal Counsel Norman Gobbi.

The exhibition became possible with the assistance and support of the Kodra Swiss Foundation, the Swissminiatur museum, the Andermatt Local History Museum, the A. V. Suvorov State Memorial Museum, Alex Renner, the owner of the 3 Könige & Post hotel in Andermatt and the directorate of the Chusovoy Metallurgical Plant. The exhibition was held under the patronage of the Russian Federation Embassy in the Swiss Confederation.