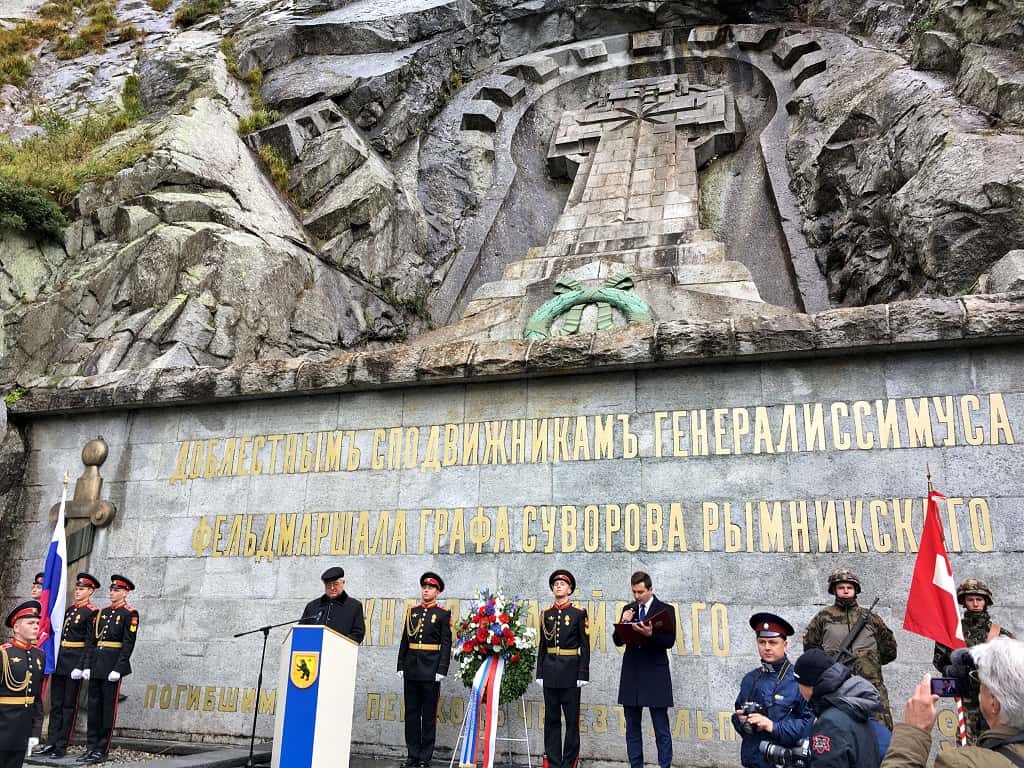 220 anniversary of Suvorov's Swiss campaign will be in 2019

The Memorial Day of Suvorov's associates, who died during the Swiss campaign of 1799, is celebrated annually for 20 years in Switzerland in the Shollenen gorge. This tradition was founded by Prince S. M. Golitsyn (1843-1915) in 1898, with his means was carved monument 12-meter height in the inaccessible alpine rock.

After the revolution of 1917 the celebrations were interrupted and resumed in 1998. How this ceremony takes place today, we will tell in our report from the place of the event.

They say that Suvorov ordered to wake himself up with the first cocks, therefore during Suvorov days in Switzerland we try to feel the same feelings that the general and his soldiers felt, and early in the morning, before sunrise, we leave warm Melide with Svyatoslav, the abbot of the Orthodox parish of Lugano, to the steep pass of Saint Gothard, where will be memorial service at the Chapel of the Fallen. The weather service promises a minus temperature, sometimes fog and a stormy wind. And these forecasts come true.

Fog and icy rain, temperature minus two. It was hard for the soldiers of our commander, because they did not have warm jackets, heat-resistant shoes and waterproof windbreakers. It's not for nothing that a cast of frostbitten legs is exhibited in the center of the exhibition "Generalissimo Suvorov - great powers high in the mountains", which takes place at the same time in the halls of the "Forum Swiss History in Schwyz" of the Swiss National Museum. 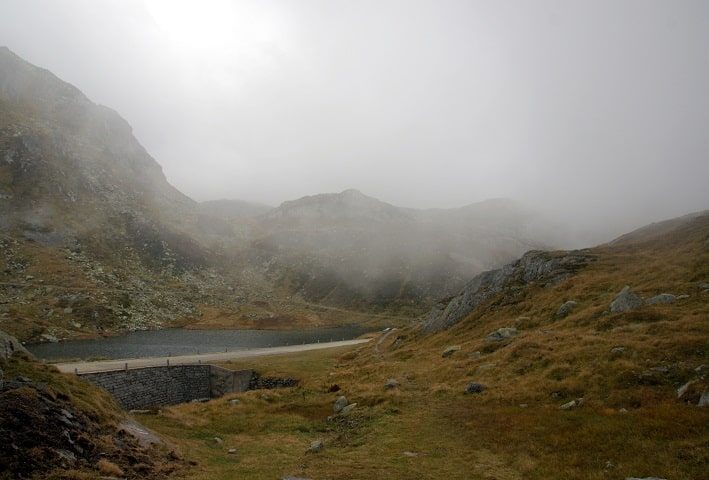 Fog on the pass of Saint Gothard, photo © Giulia Ilina

Fortunately, in 2018 it's difficult to freeze your feet, and we're not going on foot, but going by car in warmth and comfort. At the pass we go to the bar to drink tea and get warm. A local waitress says: "Where are you going in this weather!". But gradually the fog dissipates, and right above the chapel a bright autumn sun peeps out.

The Chapel of the Fallen

The Chapel of the Fallen was consecrated six years ago, on September 23, 2012, when the solemn ceremony of the Russian soldiers remains reburial  from the corps of A. M. Rimsky-Korsakov took place. They died near Zurich in battle with the French troops in 1799. Ashes were found in 1976 during the construction of the tunnel. After the exhumation, experts from the Institute of Anthropology took a long time to conduct an accurate identification.

With the help of clothing elements founded near the bones, it was established that the dead belonged to the Russian army, so the Russian authorities expressed a request to transfer the remains to their homeland in order to dignify their soldiers. After long negotiations it was decided to provide the deceased eternal peace on the pass of Saint Gothard. 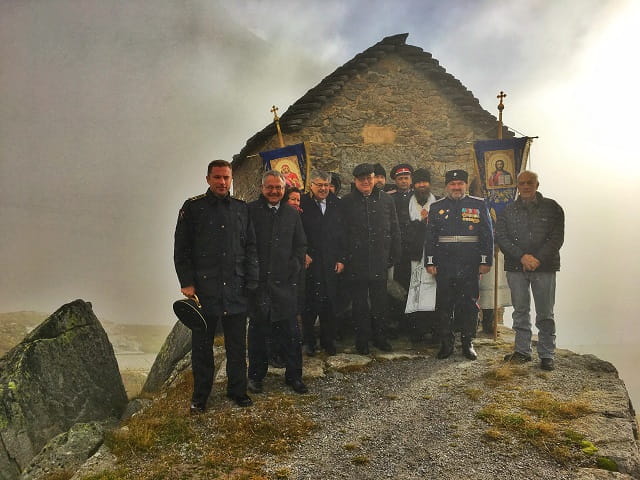 September 24, 2018, St. Gotthard, Chapel of the Fallen, a memorial service for the fallen soldiers during the Suvorov's Swiss campaign in 1799, video © Giulia Ilina

The place of the reburial was a small chapel of 1577, built on a rock above the Alpine lake, in the cracks where the bodies of the dead were thrown. Now the remains of the soldiers are placed in a coffin and covered with stone slabs, which form a kind of gravestone. In the Chapel there is a copy of the Novgorod icon of the XII century, a mosaic image of "The Savior of the Bright Eye", donated by the community of the Iosifo-Volotsky Monastery in 2001. This image was on the flags of Suvorov's troops. 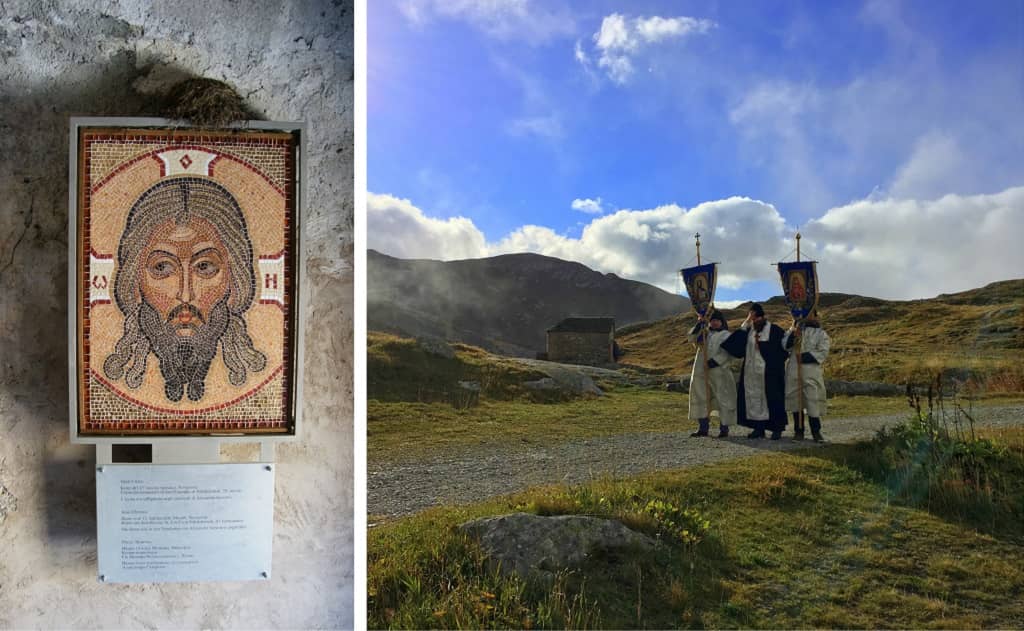 To the left, the mosaic image of "The Savior of the Bright Eye" in the Chapel of the Fallen; right, Father Svyatoslav on the pass of Saint Gotthard, photo © Giulia Ilina

After the traditional requiem, the delegation headed by the Extraordinary and Plenipotentiary Ambassador of Russia in Switzerland S.V. Garmonin moved to Shollenen Gorge to the Devil's Bridge, where in 1799 the famous battle took place. It was there, on a small site, in 1893, gratuitously transferred by the inhabitants of the Ursern valley to the Russian Empire, a monument was erected to the "Valorous Companions of Generalissimo Suvorov" thanks to the efforts and money of Prince S. M.  Golitsyn. "The glory of him, our father, the great Suvorov will not end until the moral beginnings play at least some role in the activities of mankind, while spiritual forces will be placed above the physical", wrote in the preface to the biography of A. V.  Suvorov, issued in 1900 on the 100th anniversary of the great commander's death. 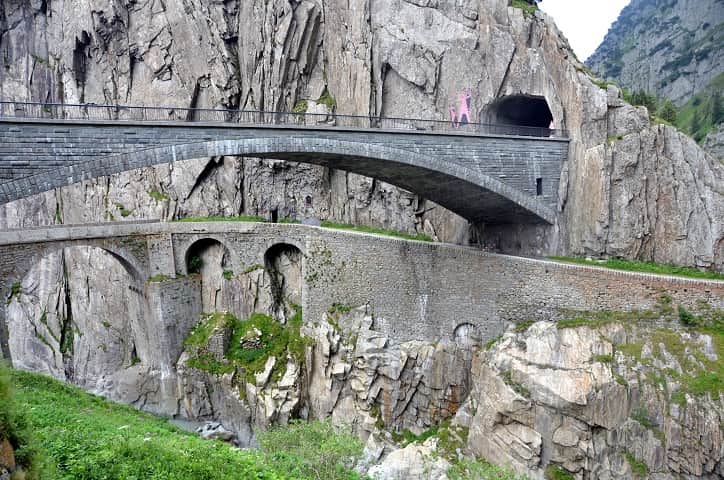 Since 1998, annually, in September, official events dedicated to the Swiss campaign of 1799 have been held in the Shollenen gorge. This year, the solemn ceremony was attended by Extraordinary and Plenipotentiary Ambassador of Russia in Switzerland S.V. Garmonin, commander of the third territorial region of the Swiss Army, divisionist Lucas Kadouff, representatives of the Uria's canton uthorities, the Swiss Ministry of Defense, local public, employees of Russian overseas institutions, students of the Moscow Military Music School, parishioners of the Orthodox parishes in Switzerland and Russian-speaking compatriots. 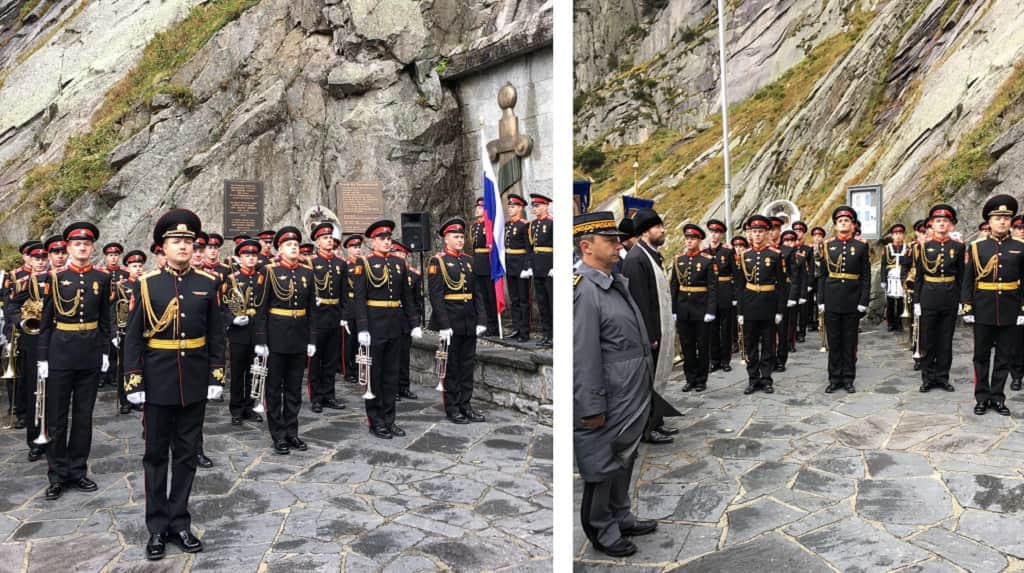 Solemn ceremony at the Suvorov Cross in the Alps, photo © Giulia Ilina

The orchestra of musicians-suvorovtsy performed hymns of Russia and Switzerland, then was laid a wreath to the Suvorov cross. Also, both sides made a speech, noting the importance of this date for the Russian and Swiss history.

This year the Suvorov cross is 120 years old. Unfortunately, the monument does not even have a tablet with the name of its creator. We hope that eventually the name of the prince will be fairly connected with this majestic monument. Also in an interview with TASS, the Russian Ambassador in Switzerland, S.V. Garmonin noted that "the monument should be entered in the register of historical heritage of Russia".

After the ceremony, very frozen participants were fed with "Suvorov" food - pearl barley and black bread with herring, well, with a glass of vodka to keep warm! 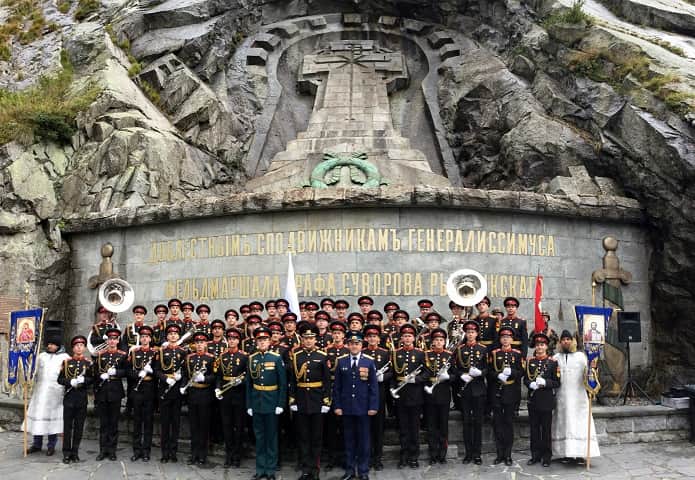 Memory photo, after a solemn ceremony at the Suvorov Cross, photo © Giulia Ilina

The next day a solemn reception was held in the Embassy of the Russian Federation in Bern devoted to Suvorov days in Switzerland, where the students of the Moscow Military Music School performed with a wonderful concert, and the compatriots from Samara gave an interesting story about the museum of the 5th Hussar Alexandrian Her Imperial Majesty Alexandra's Feodorovna's regiment, because it is very important to know about the past of Russia and to talk about forgotten pages of the history. 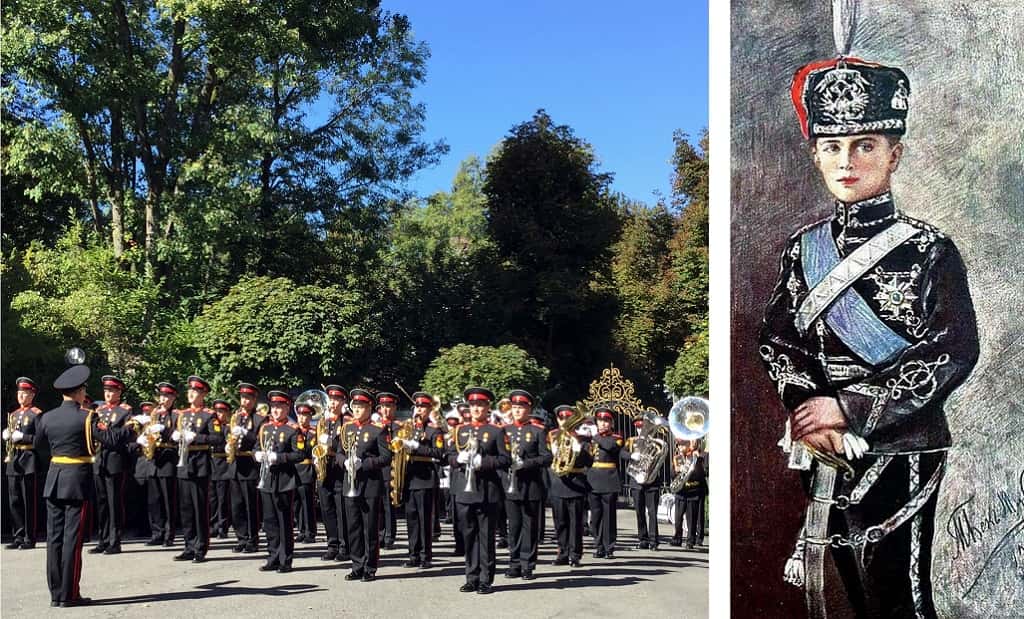 To the left, a concert by disciples of the Moscow Military Music School in the embassy, photo © Giulia Ilina; to the right, Tsarevich Alexei in the form of "Black Hussar", photo WEB

As Academician D. S. Likhachev wrote: "Just as the personal memory of a person shapes his conscience, his conscientious attitude to his personal ancestors and close ones - to his relatives and friends, to his old friends, that is, the most faithful with whom he shares common memories, - so the historical memory of the people forms the moral climate in which the people live".

So we will actively and dignitiously prepare for the upcoming anniversary, because in 2019 there will be celebrated 220 anniversary of the Suvorov's Swiss campaign!