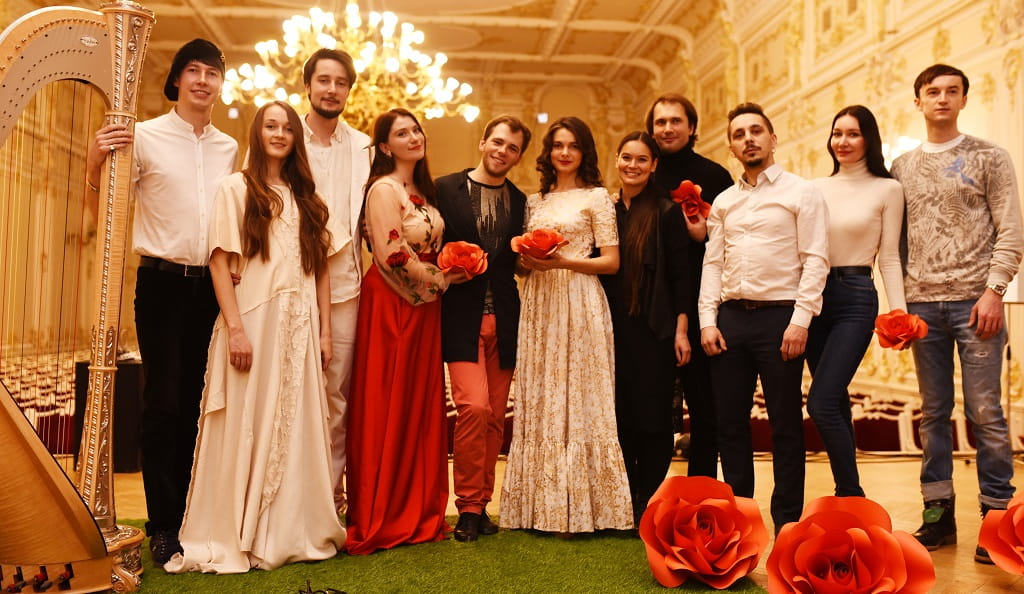 A bit of sunshine in cold winter

A stunning performance was held in St. Petersburg - in the Small Hall of the Saint-Petesburg Philharmonia ended the “summer” creative evening of the harp virtuoso, laureate of numerous music competitions, Alexander Boldachev.

The concert of the musician and composer was a truly impressive event for the Russian cultural capital, which had seen many similar events. In the middle of the dank winter, the harpist gave his hometown a real summer evening filled with music, vocals, amazing choreography and stunning painting. 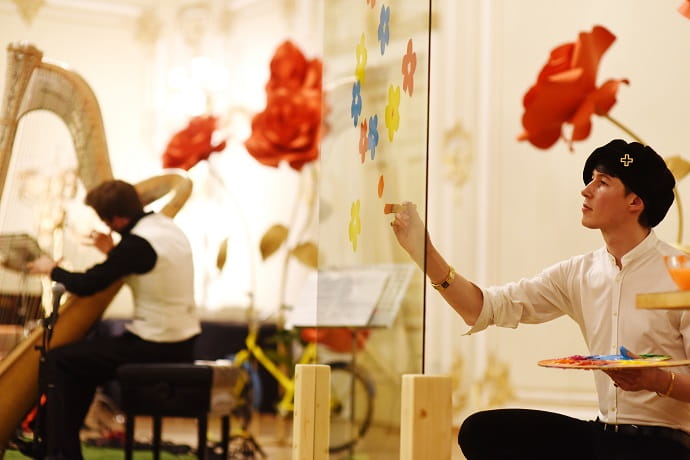 The Russian-Swiss artist Alex Doll was a special guest of the concert, his exhibition of paintings preceded a musical evening. The exhibition named “Flowers” organically intertwined with the overall concept of the event, creating a warm atmosphere in the hall throughout the summer. The amazing energy of the paintings and the high spirits of the guests literally electrified the air, and the Open Opera Project duet was the first who succumb to this magic - the vocalists sang a small aria in the main hall without waiting for the concert to start. 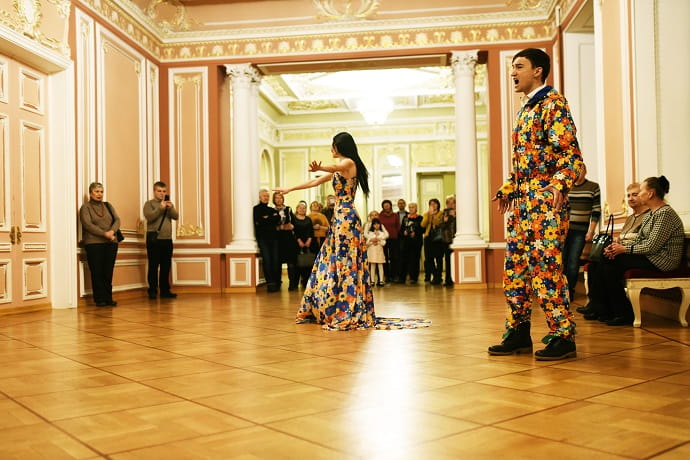 And the evening began with a performance of Maria Gridneva and Vitaly Makarenko. To the sounds of the harp, they incendiary sang the duet of Don Juan and Zerlina from the Mozart opera. Having performed several compositions, Alexander invited Anna Vikulina (delightful soprano) to the stage. Their tandem presented the hall with three “flower” compositions, which broke a real squall of applause. The audience was amazed by the dance of colors performed by Doll, who, to the sounds of the harp, created painting with flowers on glass. 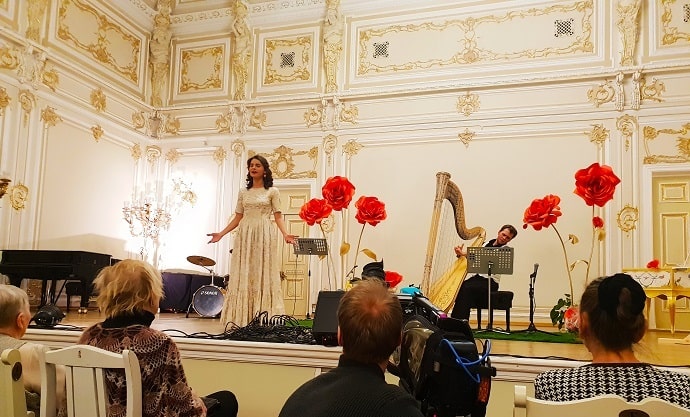 The hall lights were dimmed with the beginning of musical evening's second part. What other amazing surprises did Alexander prepare for the guests? The audience literally held its breath ... As it turned out, Alexander himself waited for this moment with no less trepidation. His good friend, choreographer Lilia Burdinskaya, came on the stage, and the harpist wanted to perform with her for a very long time. On this wonderful evening, Lilia not only bewitched everyone with her poems, but also completely conquered the public with contemporary dance. 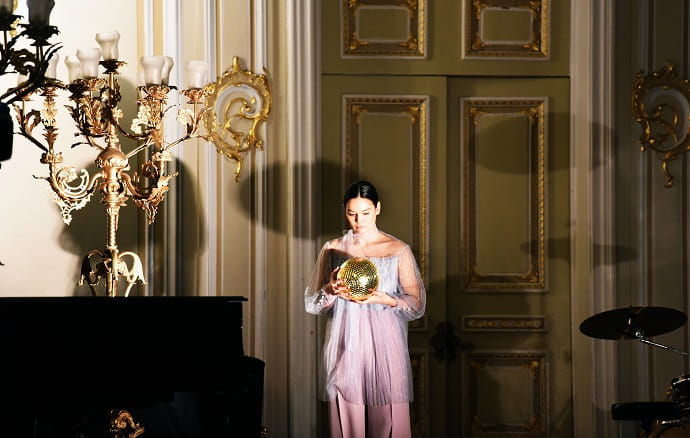 After, the violins of Sofia Bridge and Igor Zalivalov sang on the stage. The saxophonist Veronika Kozhukharova and Alexander Boldachev himself performed magnificently in a duet. Their joint performance of the Millau composition amazed the audience so much that many could not hold back their tears. While playing, Veronica seemed to leave a piece of herself on the stage with each note, which affected the deepest strings in the hearts of the listeners. 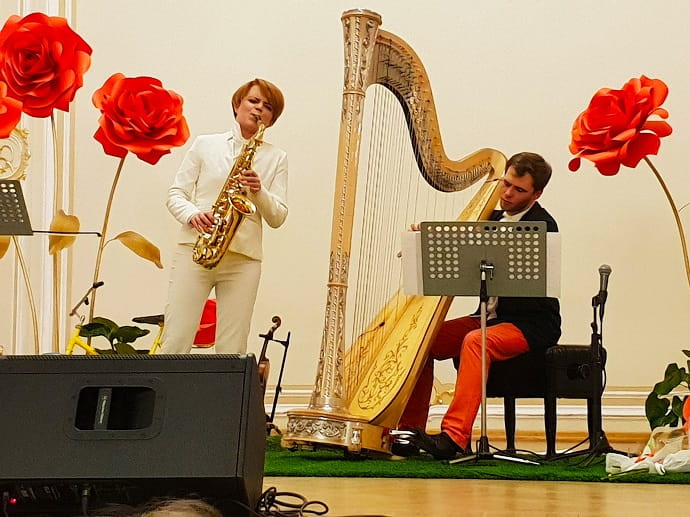 But despite the many surprises that filled the concert, his absolute favorite was the performance of small artists who sang the most thematic song of the evening - “Song about Summer”. Young talents patiently waited 3 hours to warm up with bright and kind performance each guest of the concert. Definitely, there were no indifferent spectator left after their performance in the hall!

Of course, Alexander also played solo this evening. In addition to the beloved classics, many new compositions sounded from his performance, such as Argentine tango and Bohemian Rhapsody of the Queen (video can be viewed here). Vladimir Rozanov also rejoiced with his playing on the accordion. The performance was completed by Alexander's longtime friend, Elizaveta Bokova. Having presented several compositions to the public, she invited all the participants to the stage, who performed the famous Counting Stars of the OneRepublic band right at the curtain.

The concert “Harp. Summer” with a common theme harmoniously united several art directions under the roof of the Philharmonia, and now, when the curtain is lowered, we can say with confidence - the experiment was a success! Dynamic, bright and at the same time such a homely concert ended with a standing ovation, shouts of “Bravo!” and flowers. Such a long-awaited and such a short summer ended ... But it left in the soul of every spectator a little sincere and, it seems even magical warmth.

Fragments of the concert can be found here.