“DAVID BURLIUK. I SPEAK OUT!”

Monographic exhibition of the great Master, the father of Russian futurism David Burliuk opens on October 4 at the Museum of Russian Impressionism. The exhibition “DAVID BURLIUK. I SPEAK OUT!” included more than fifty paintings of the artist, painstakingly assembled from two dozen private collections and state museums. Separate paintings are first presented to the public; never before they have been exhibited.

The exposition is waiting for connoisseurs of the Master's work until January 27, 2019. The Museum exhibits works written by Burliuk from 1900 to 1930. This is a real creative kaleidoscope, which brought together artistic experiments of the painter on the way from the impressionism to the mature avant-garde. 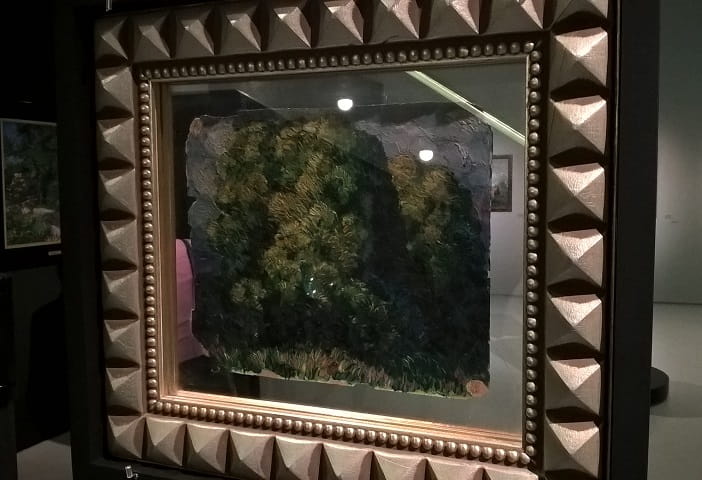 Viewing chronologically arranged pictures, it turns out that after a hundred years the creativity evolution of the Russian futurism father is still a mystery. Who was David Burliuk? An outrageous artist, a poet and just an amazing person, he was the patron of Mayakovsky, who called him his teacher.

Having a rare gift to be in the center of attention, Burliuk caused contradictory feelings to others — some were admired by him, others criticized without hiding irritation. Artist Anton Ažbe enthusiastically called him "a wonderful wild steppe horse", and B. Livshits - "one and a half eyed archer."

The exhibition is logically divided into three blocks, and the first of them offers the guests of the Museum to look at the artist’s early creations - open-air landscapes, impressionistic and texture-pictorial expressionistic works. For many, this part of the work of Burliuk can be a real revelation. The master, like most Russian avant-garde artists, went through the school of new French painting, however, unlike the others, he never left impressionism. His echoes are noticeable in all his works, and he was convinced that this direction was the hope of Russian renewed painting.

The central work of the block was the painting “Portrait of a Mother”, distinguished by an amazing harmony of naturalism and decorativeness. Looking at the painting, it is hard to believe that it was written by a future avant-garde futurist. Burliuk called this style of painting desperate realism. 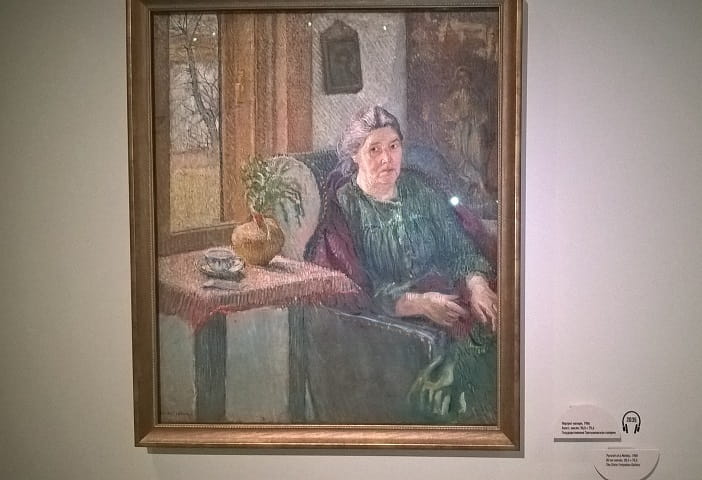 David Burliuk was, as his contemporaries said, omnivorous - he greedily devoured everything that was interesting to him. Without hesitation, he studied from others - Van Gogh, Picasso, Gauguin, Matisse, and even Russian masters influenced the further development of the artist's work. For example, two paintings are seen admirably contrasting, “Rose Bush” and “Oxen”, in which the influence of French Fauvism is easily recognizable.

So, moving between the paintings, the guests of the Museum will follow the creative path of the Master. Leaving the era of early impressionism, looking at Burliuk-Fauvist, visitors will find themselves at the center of the avant-garde and see futurism as it was imagined by Burliuk himself. 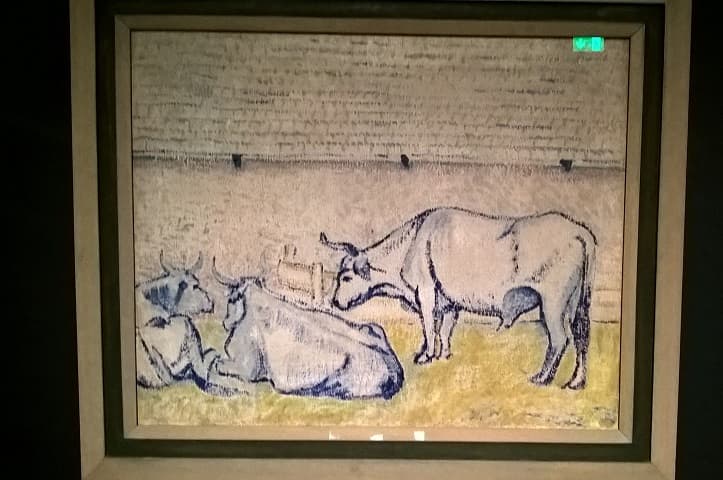 This block stores one of the artist’s most recognizable paintings — a portrait of V. Kamensky, a poet who became one of the first Russian aviators. The painting depicts a hero stretching a rose to a muse hovering above his head. The second significant work of the block is “A Portrait of My Uncle”. In it, the only one of them in the exposition, the influence of Picasso's creativity is clearly noticeable. Author's repetitions of this particular work were bought in the early 1920s better than others and literally fed Burliuk and his family. By that time, the work of the future father of Russian futurism was already known even in the provinces.

Special attention in this block deserves the painting "Reaper". Since the moment the Master left the country, it is being exhibited for the first time.

The last block consists of the artist's works, written during his stay in Japan and America. Unfortunately, the Japanese creative stage of his life is little known to the Russian connoisseurs. In the early 20s, the inhabitants of the Celestial Empire knew almost nothing about futurism, but were keenly interested to it. It is not surprising that the Russian artist, who called himself the father of Russian futurism, aroused the live curiosity of the Japanese masters. 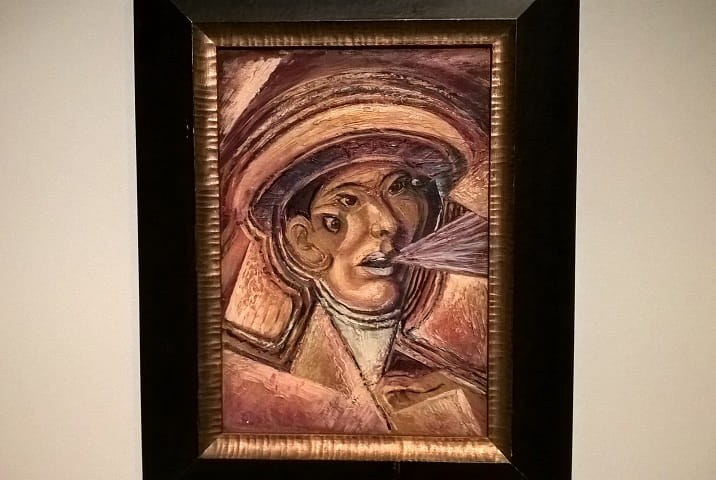 Contemporaries of Burliuk note that the art of the Master's Japanese period was multifaceted and diverse. The artist visited many cities in the country, climbed Fujiyama and poured all the impressions of Japan on many futuristic canvases. There were born the paintings "Fisherman", "The rice breeder" and others.

Knowing much of the Burliuk biography as an artist, we speak little of him as a poet. However, the Master himself noted: “I am equal both a poet and an artist”. Therefore, the Museum presents at the exhibition a model of a unique collection “Balding Tail”, the only one that was printed in Russia before Burliuk emigration. It contains the artist's corrections and the illustrations he has pasted in — like this master wanted to see his book. Here you can also get acquainted with its typographical copy. 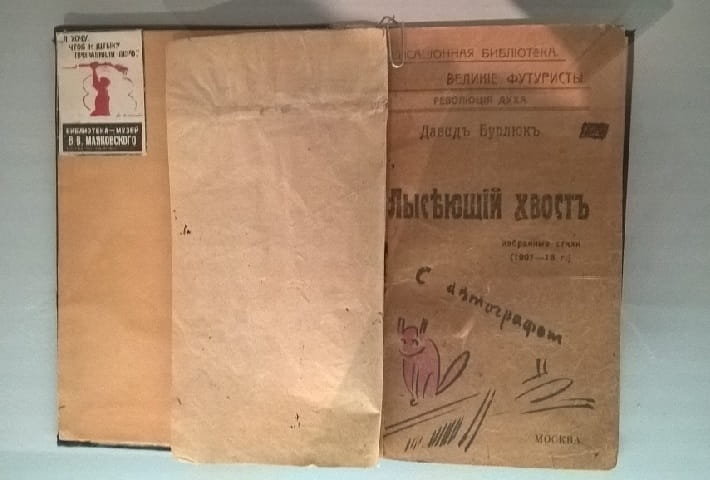 The artist came to his homeland already at a respectable age - he was over 70. Then the audio recordings of the Master's voice reading his works were made. They became the sound design of the exhibition. Also on display is an illustrated catalog of Burliuk artworks with his poems and graphic drawings.

David Burliuk had a terrific sense of talent. He gathered amazing people next to him: Malevich, Livshits, Goncharova, Kamensky, Exter, Khlebnikov ... The personality of the artist did not leave anyone of his contemporaries indifferent and remains interesting even a hundred years later.

The exhibition will be open since October 4, 2018 until January 27, 2019 in the Museum of Russian Impressionism