Nikolay Nikanorovich Dubovskoy (1859—1918) ― a universally acknowledged, much-loved and, so to say, successful artist ― was slightly moved to the shadows in the 20th century turmoil by an unexplainable whim of history. His paintings were ignored by Soviet textbooks, they weren’t printed on candy wrappings ― as it happened with the famous Shishkin’s “Morning in a Pine Forest” and other works by Russian realists.

At that, when the emperor Alexander III noticed Dubovskoy’s “Hushing” in 1890 at the 18th exhibition of the Society for Travelling Art Exhibitions, he ordered to purchase the painting and carry it to his palace immediately. Pavel Tretyakov, who also wanted to buy the work, was extremely surprised not to find it at the exhibition. However, the prominent collector didn’t remain disappointed. Soon the artist created a much larger copy of the painting ― it is now in possession of Tretyakov Gallery.

At present, the artistic legacy of Nikolay Dubovskoy becomes more and more popular on the global scale. His works attract much interest; they are purchased for prominent collections such as the Museum of Russian Impressionism. 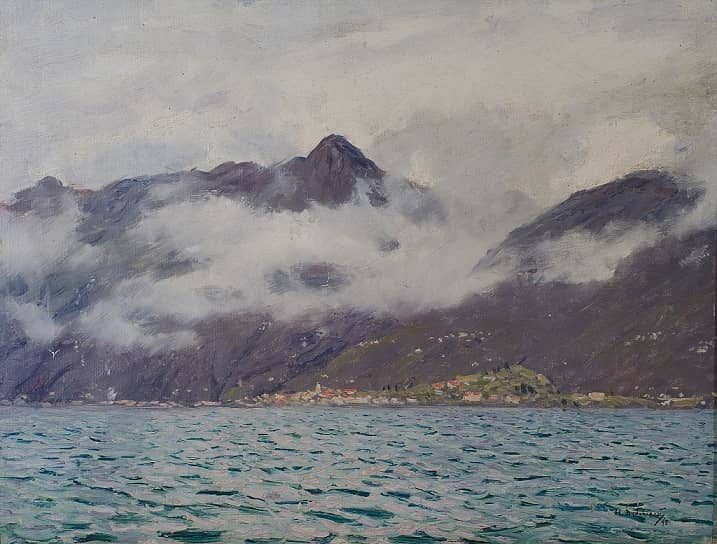 “Nikolay Dubovskoy is one of the most-loved artists among our staff. When we were choosing the design for our catalogue, we wanted to put the reproduction of his work on the cover”, – says Yulia Petrova, the Director of the Museum of Russian Impressionism. Several Dubovskoy’s paintings are on the museum’s permanent exposition. One of them is “OnLagoMaggiore”. Leaden-turquoise ripples of the lake, gentle green slopes of Alpine foothills, low transparent clouds. Fresh mountain breeze seems to engulf the viewer and carry him or her into the dreamland... There’s a true “landscape of the mood” in front of us.

“I’ll tell you an interesting story about the painting,” – the Director continues. “Based on the dating of the work ― 1895 ― our experts are inclined to assume it was created by Dubovskoy during his wedding journey. The artist and his beloved Faina Terskaya along with her sister and her mother’s friend left for a journey across Europe.

Dubovskoy had been courting Faina even before the trip, but they couldn’t go alone as it would be considered inappropriate, so they had to travel with other people around. They journeyed across Italy and Switzerland, when Dubovskoy, totally sure of his all-encompassing feelings, proposed to Faina. Without a second thought they got married in Florence. What is more, Terskaya became his apprentice and the young couple decided to dedicate their lives to art and serve it together.”

Dubovskoy is rightfully called a master of “genuine landscape vision”. The artist depicts the nature through human impressions, as an echo of the mood, as a vibration of spiritual condition. The artist’s works used to see many exhibitions; he was internationally acknowledged. Thus, in 1913 at the 11th Munich International Exhibition Dubovskoy was awarded a lesser gold medal for his works. We hope that someday the retrospective will be organized to pay well-earned tribute to his talent.