On September 30, 2018 in the halls of the “Forum of Swiss History in Schwyz” was held the end of exhibition “Generalissimo Suvorov - Great Powers High in the Mountains”, organized by the National Museum of Switzerland.

The words that the Swiss still remember the great commander is not a figment of fantasy. And an result of this is how traditional Suvorov days and events were held this year in a friendly manner (for more details, read our article - 220 anniversary of Suvorov's Swiss campaign will be in 2019).

And at the “Forum of Swiss History in Schwyz” the exhibition dedicated to Suvorov caused, as they say, a full house. The halls were filled with visitors, and there were lines to three experts, who scrupulously examined the memorial materials brought by local residents about A. V. Suvorov. Collectors showed old magazines, books, prints, and experts in white gloves gave them a scientific assessment. 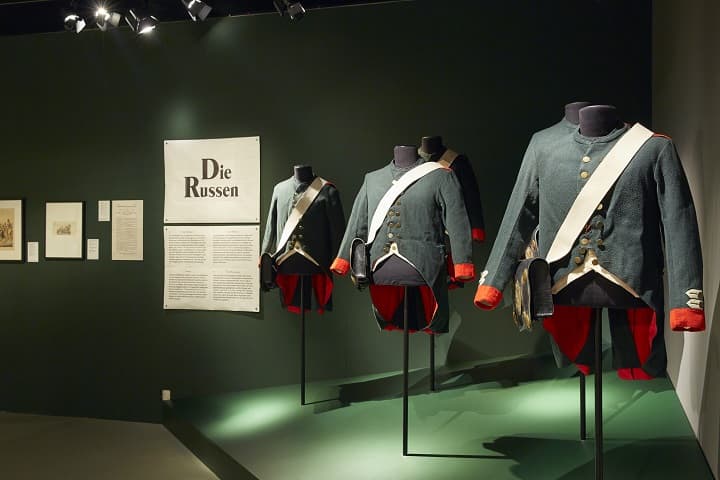 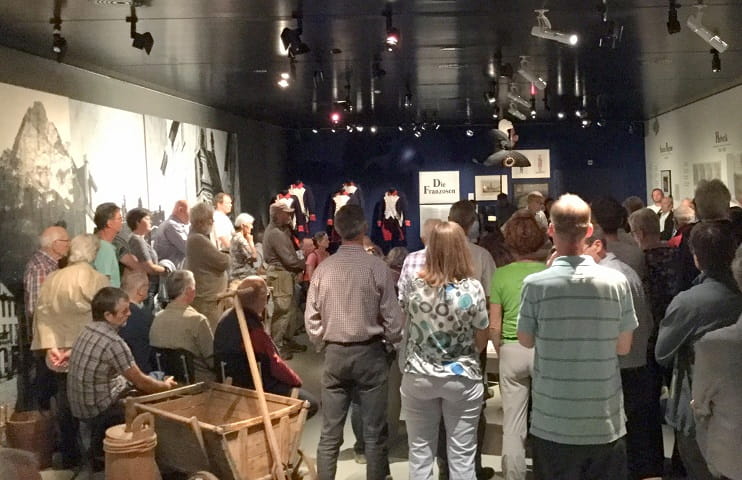 By the number of brought artifacts, it seems that the author of the famous “Suvorov Collection”, Baron V. P. Engelhardt, gathered 100 years ago not everything related to Suvorov's campaign in the Alpine country. So there is hope for modern collectors who dare to follow in the footsteps of the great commander through the mountain passes of Switzerland.

Although, as a historian and archivist Oscar Wust told us that Baron Engelhardt even bought the railing of the house where the commander stayed, as the enterprising owners included them in a lot of valuable things related to the stay of the general in Switzerland. These railings are now stored in the archives of the Suvorov Museum. 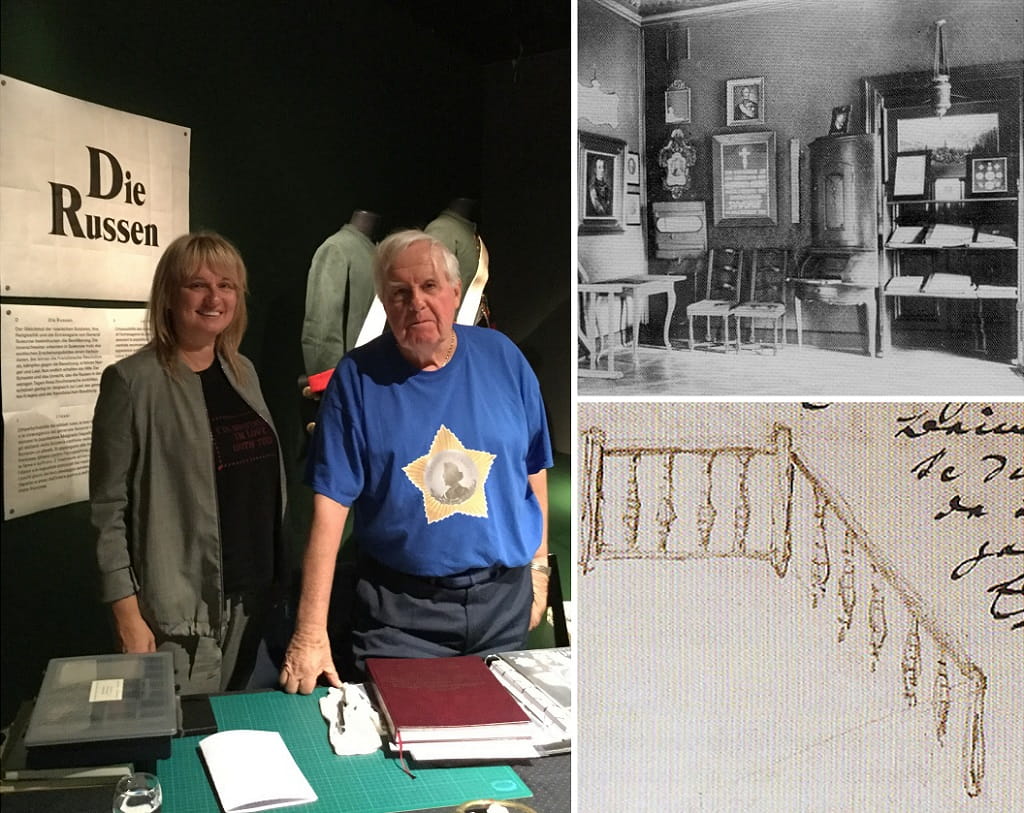 Left, VLV-mag publisher with famous historian Oscar Wust, photo © Giulia Ilina; On the right, part of the Engelhardt collection with 15 objects (including railings) from the House of Suvorov in Nestal, photo © Oscar Wust, Fotosammlung Museum Freulerpalastm

The exhibition also showed the vest of the Generalissimo, apparently he had forgotten it in the bustle of the Swiss campaign, or perhaps it was washed by the friendly owners of the house, and while it was dry, the commander had already left; two glasses, which A.V. Suvorov used to drank wine in the sunny canton of Ticino, famous for its merlot, and the core, which fell into the courtyard of the house in Aldorf when the Russian commander was there. 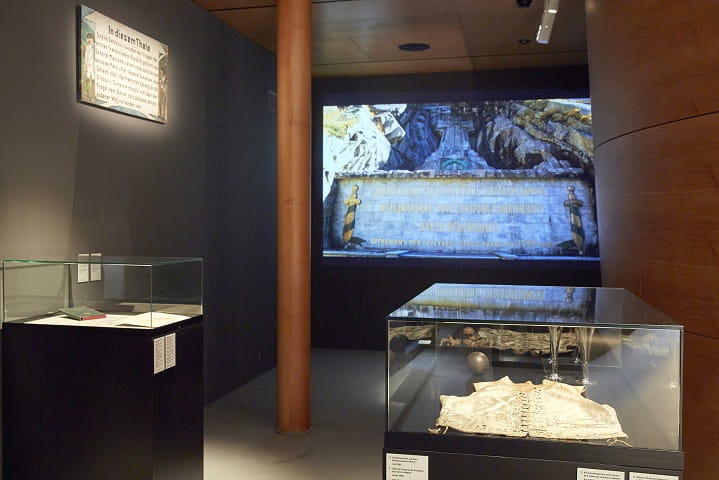 It is important to note that the concept of the exhibition is much more important than just artifacts associated with the campaign of Russian troops. “In 1798, the French Revolution laid the foundation for political transformations. Trying to preserve the old order, the European monarchies unite in a coalition against Napoleon. Soon the war covers the whole continent. In 1798, French troops occupied Switzerland, and the Swiss Union was transformed into the Helvetic Republic. The new state is formed in the face of resistance, political unrest and occupation. Then the Russian emperor sends his victorious general Alexander Suvorov to Switzerland. This exhibition shows the famous campaign of Suvorov through the Alps and Switzerland at the time of the birth of the modern state, ”- this is indicated in a small brochure. The exhibition, according to its organizers, aroused great interest and resonance among residents of Switzerland and its guests.

The exhibition says that during the “French occupation, the Swiss saw in Suvorov a long-awaited ally. The image of Russia as an ally was even more entrenched in the memory of the people, after the Emperor Alexander I at the Vienna Conference of 1815 supported the independence and neutrality of Switzerland. ”

Also interesting are the memories of Josef Thomas Fassbind, a priest from the city of Schwyz: “Despite the terribly long hike with the length of 300-400 hours which were needed to reach our country, they do not seem very tired and are cheerfully marching towards the enemy. They were also very moderate and modest, and did not cause the slightest harm to priests, churches, or women ... "(Angela Detling. The Joseph Thomas Fassbind History of Switzerland 1755-1824. Volume 3. Zurich, 2006, p. 1040- 1041)

How not to recall the “journal” of Captain Gryazev, the famous memoirs of the Suvorov campaign, which tells how Grand Duke Constantine (the son of the emperor Paul I), being with the vanguard in Mutental, “bought two ridges of potatoes for them, paying the master 40 chervonets”. The creators of the film “Suvorov. Alps. 200 years later. ” (released on television by Zvezda TV channel) considered that 40 chervonets was 137 grams of pure gold. Just think, four thousand dollars for potatoes! But food was more important then gold. 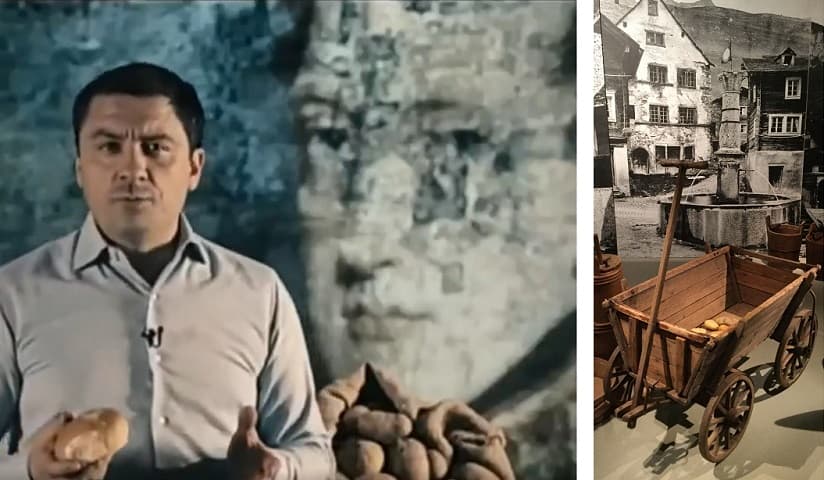 On the left, the anchorman of the Zvezda TV channel, A. Egorov, talks about the golden carto, photo WEB; on the right, potatoes on display, photo © Giulia Ilina

The most difficult passage through the Alps took the lives of many Russian soldiers, and in 1898, in memory of the dead soldiers of the Suvorov army in the Szollenen gorge, the Suvorov cross was opened at the expense of Prince S. M. Golitsyn (1843-1915). 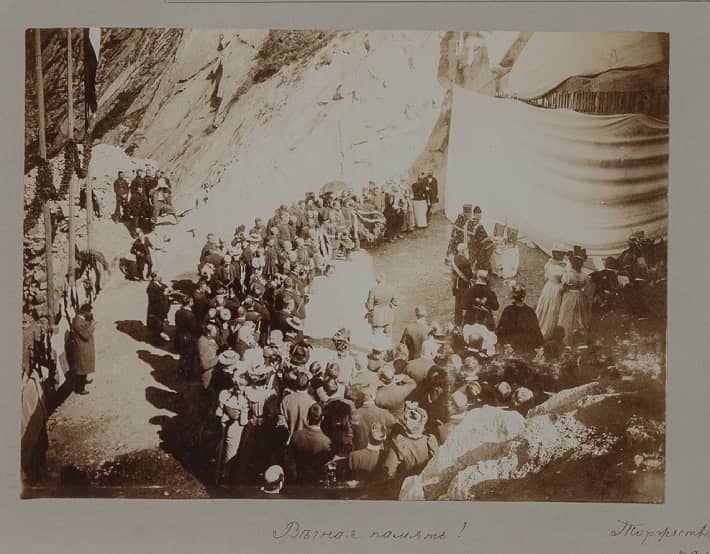 Opening of the monument “To valorous companions of Generalissimo Field Marshal Count Suvorov - Rymniki, Prince of Italy, who died while crossing the Alps in 1799” in 1898, photo © State A. V. Suvorov Memorial Museum

On October 1, 2018 Walter Gähler, a Swiss Suvorov enthusiast, founder of the Suvorov Museum in Lynthal (canton of Glarus, Switzerland) visited exhibitions in Melide. The Swissminiatur Park-Museum and the Swiss Kodra Foundation presented a wonderful film to the Suvorov Museum in Lintala by the Russian filmmakers of the TV channel Zvezda - "Suvorov. Alps. 200 years later ”, as well as a poster “A. V. Suvorov” by artist Sofia Shichkova from St. Petersburg . 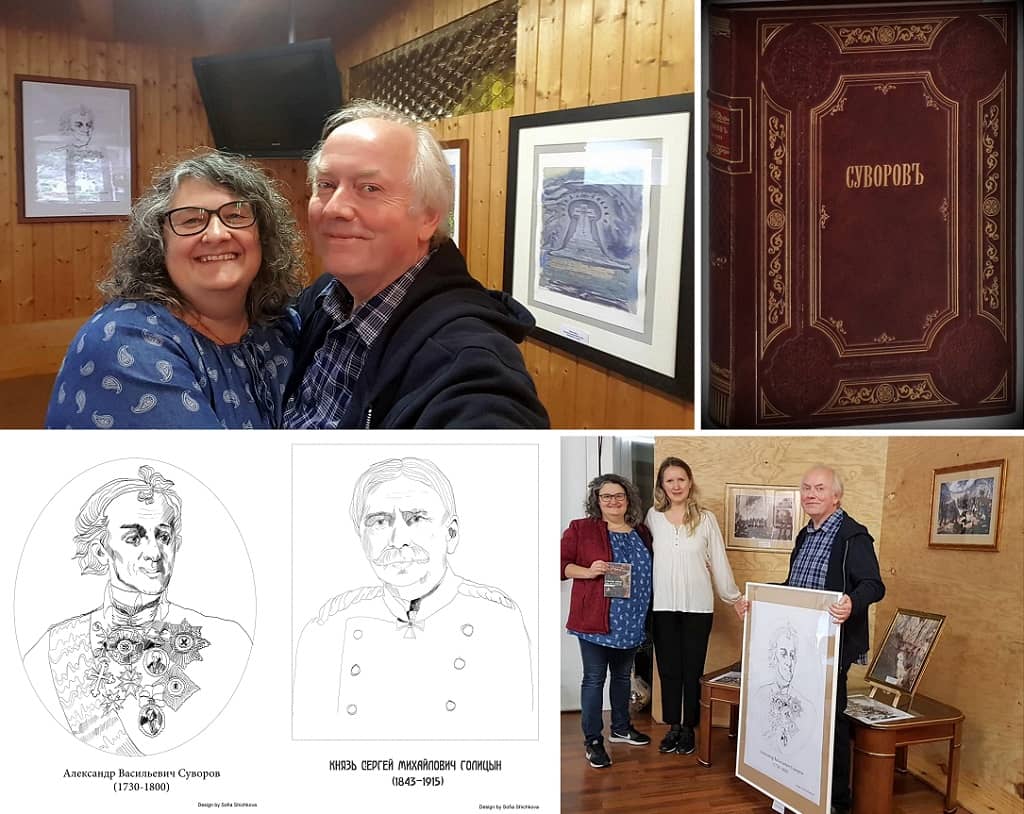 We hope that next year all the Suvorov's enthusiasts from Switzerland and Russia, as well as other countries, will join forces and will prepare together for the 220th anniversary of the Suvorov Alpine crossing!