There were exciting days for theatergoers in Milan from November 27 to December 2. Especially for those who know Russian. After all, two famous Russian theaters arrived at Piccolo Theater in Milan and brought performances in Russian. For the convenience of the Italians, they were translated into Italian and were at the running line. 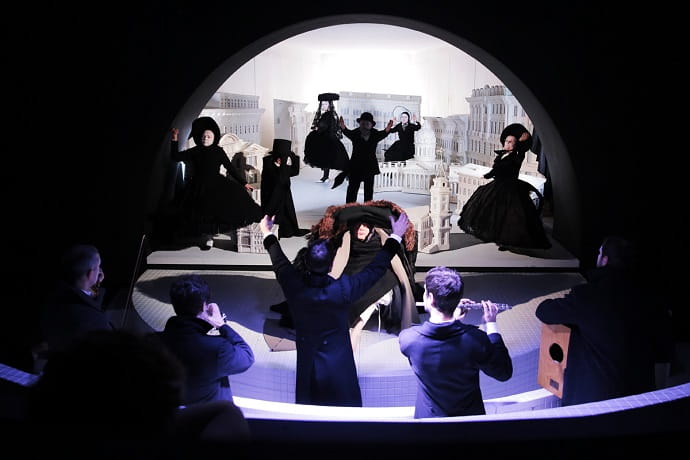 Piccolo in Milan has long-standing and strong ties with Russia. Sergio Escobar, director of the Milan Theater, has been friends with Leo Dodin for many years. Almost every year he comes to Milan with his performances. And this time Escobar invited the Alexandrinsky Theater and the Vakhtangov Theatre, they brought four performances. “Your Gogol. The last monologue" by Valeriy Fokin, "On the Other Side of the Curtain" by Andriy Zholdak based on the Chekhov's "Three Sisters", and the performance by director Anton Okoneshnikov based on the poem by Alexander Blok "The Twelve" brought by the Alexandrinsky Theater of St. Petersburg. And the Moscow theater brought the famous “Eugene Onegin” staged by Rimas Tuminas. 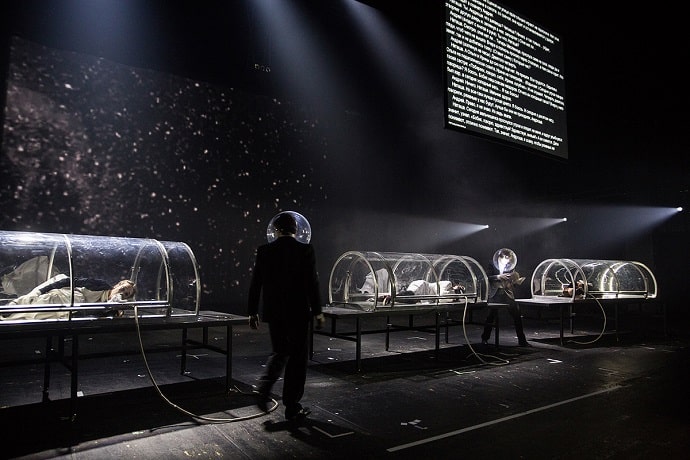 "On the Other Side of the Curtain", photo © piccoloteatro.org

- Why did two famous Russian theaters come to Milan Piccolo?

Sergio: Our theater is international, we love to give the stage to theaters from different countries, in more than 30 languages, it was not without reason that we were given the title “Theater of Europe” back in 1991. We have special relations with Russia, we have already invited Russian theaters to Milan 110 times or have participated in tours in Russia ourselves. And this is not the number of all performances - this is the number of productions (for example, now “Eugene Onegin” has passed twice, “Your Gogol” 3 times, but we count everything as two, not five, editorial note). With St. Petersburg, we probably have a particularly strong relationship. We were invited to the 300th anniversary of the city, and to the celebration of the 250th anniversary of the Alexandrinsky Theater. I just came from St. Petersburg, we participated in the International Cultural Forum and brought the production of “Elvira” with Tony Servillo there.

Valery: The Piccolo Theater is one of the most famous theaters in Europe. The first stationary drama theater in Italy, created in 1947 by Giorgio Strehler. And we have a long-standing relationship. We agreed more than a year ago, and there was no doubt where to go. If it were to another place, neither Stanislavsky, nor Strehler, no one, would understand us.

Rimas: Giorgio Strehler is a unique director who inspires me. I tried to imitate him, I wanted to guess the poetry of the theatrical language. I have seen his productions several times, for example, Campiello. It was a magic, technical and visual miracle. After the performance, I even took some artificial snow that was there, and this snow became my talisman. 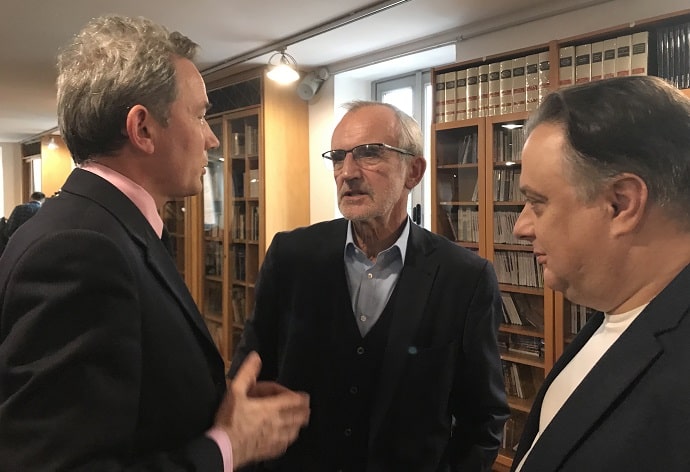 - Why did you choose these performances for Italy, for Milan? Were there any difficulties?

Valery: In any situation, even when the political situation deteriorates, theatrical language always remains, and we would continue to work. Politicians burn bridges, and it is very important that we create them, but do this because this is our mission, our work. The language of the theater is a language that beats from heart to heart, without intermediaries. This is the power of the theater.

We brought you the Russian classics in a modern interpretation. It is important that the Italian audience sees classic authors such as Pushkin, Gogol, Chekhov, Blok, in the modern vision. Gogol felt at home in Italy, and after him we feel at home here.

Rimas: I am proud to represent Pushkin, the most important his work. It sounds like this: “Vulgarity, ignorance, stupidity, it all are very used to, adapts to today. And the past is afraid. And Pushkin cleans us, opens the way to beauty and harmony. In the 90s, a hero came to the fore, who could tell the truth, we put him in different tragic circumstances, poured him with ice water, mud, he was burned, but he spoke. And now he is tired and dead. And he was replaced by a woman - the greatest and most beautiful creation by all authors, by Tolstoy, Chekhov, - and this woman leads us to beauty. And the theater should be feminine. And here, I would call the performance “Tatyana”, as Dostoevsky said: “Probably Pushkin is wrong. It was necessary to name the novel "Tatiana". And we follow this line, revealing the beauty of a woman. 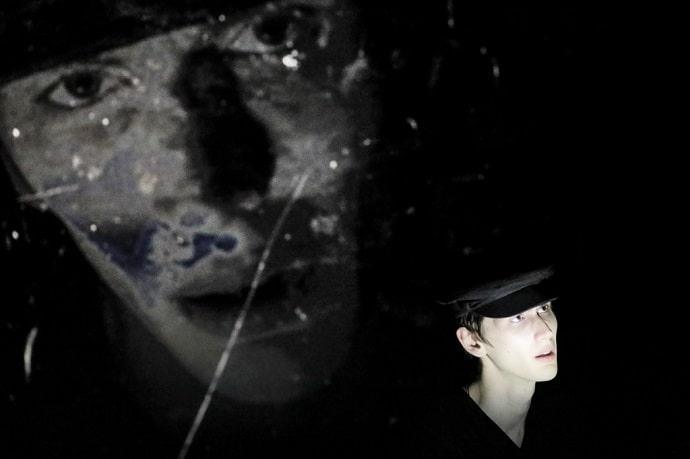 Valery: These four names are great figures. There are still Dostoevsky and Tolstoy. Gogol adored Pushkin, Pushkin always stood first for him. Chekhov respected both, and I am sure that Blok, too. I did not call up on this issue. All these four authors demonstrate high literature and culture, different qualities of our character and world character. When I say that the language of the theater is one, it means that we are all the same. We have our mentality, taste and history, but we have what unites us - humanity. And we have defects with which we were born in this world. And the only question is - how can we overcome them? And now, when the world is in a hysterical state, we must begin to communicate with each other. Then fear, this pathology, which "is the guarantor of our security", as we say, - this expression is complete nonsense - will recede. And the theater helps in this.

- I saw a bear with Tatyana on the cover of a booklet. Have you brought a live bear?

Rimas: Yes, the bear is alive, brought from Russia. And Tatiana is alive, and the bear is alive. And she is given to the bear. Brought from Siberia. And the hare! On the road to Petersburg there is a monument to a hare. Pushkin was driving along this road, on the very day when there was an uprising of the Decembrists. Then they were crushed, executed and exiled to Siberia. Pushkin went to Petersburg to participate in this uprising. But he was crossed by a hare. Pushkin was very superstitious, he unfolded the sleigh and returned. We almost lost Pushkin, and the hare saved him. It seems to me that this trinity - Tatiana, Hare and Bear - is the essence of the play. 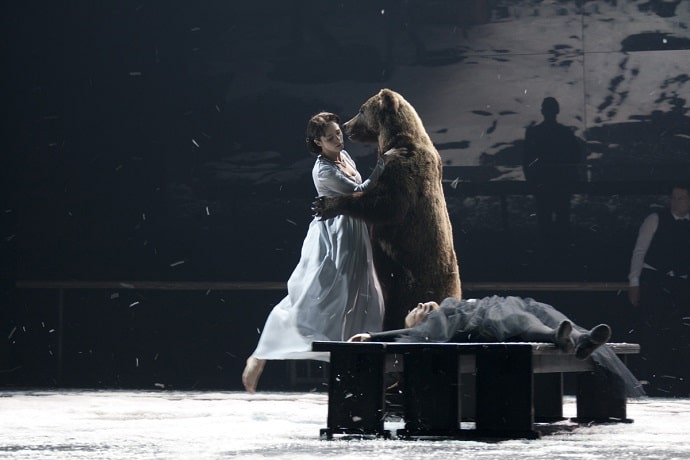 At this we finished conversation. All four performances were held with a full house. Gogol and Blok - in the theater studio Melato, the first - only three rows around the stage - about 50 spectators, the second - about a hundred people seated radially in a circle. Pushkin and Chekhov - in a large theater for 990 people.

Moreover, "Eugene Onegin" - two days, with two different Onegins, Sergei Makovetsky played on the first day, and on the second day, Alexei Guskov. And both great actors could be found on the streets of Milan. It turned out that Guskov had never been to Milan, so for him it was still a chance to see the beautiful city. And the audience, both Russian and Italian, gave their preference to the great Pushkin.