In 1938 the mysterious disappearance of a physicist Ettore Majorana stirred the whole Italy. He literally vanished into thin air! Everyone wondered and made various suggestions – murder, suicide, abduction? Then suddenly, eighty years later, the Rome prosecution office announced that they found the scientist’s trace: between 1955 and 1959 lived in Venezuela. So, what has really happened?

Ettore Majorana was born in a Sicilian city of Catania in 1906. Since his very childhood he had showed unique talent in mathematics. He graduated as an engineer and enrolled to a freshly established physics department headed by a famous Italian scientist Enrico Fermi.

While in Rome, Majorana worked in the most prominent team of theoretical physicist known as “Via Panisperna boys”. These “boys” pioneered the nuclear reactions studies, which later served as a basis for creating an atomic bomb.

“Majorana was a man of a strange disposition; he was very shy and unsociable. During his morning tram trip to the institute he would frown deeply, lost in thought. Novel ideas, solutions to complex problems and explanations behind seemingly unexplainable test results often crossed his mind. Then he would rummage his pockets, retrieve a pencil and start writing down the most complex of formulas on a cigarette pack”, — that’s how the young scientist was described by Anna Fermi, the Nobel Prize winner Enrico Fermi’s wife.

“A modest and calm person with outstanding abilities”, — was Ettore Majorana’a characteristic given by the “Via Panisperna boys” fellow-researchers. His scientific career was more than successful. He agreed to assume the position of a theoretical physics professor in the University of Naples after refusing to work in Cambridge and Yale.

On March 25th, 1938 in Naples he embarked a steam boat to Palermo. “I have a sole wish: don’t wear black. If you want to do it so much, do as you will, but mourn me for no longer then three days. Afterwards remember me, if you can, in your hearts and forgive me”, ― he wrote to his family.

For many years this letter to his family had been viewed as an evidence of suicide. But then another message followed; for years it had served a principal proof of the murder hypothesis. Next day after his steam boat trip the scientist wrote and sent a letter to his friend. “I hope you received both the telegram and the letter. The sea refused to take me, so I’ returning to the Bologna hotel. I’m going to leave tuition. Don’t take me for a girl from Ibsen’s novels, because the reason is different. I am at your service to explain everything”. No other information was received from Ettore Majorana.

Enrico Fermi persuaded Benito Mussolini to offer a reward of 30,000 lire (an enormous sum at the time) to anyone who would report any useful information about the famous disappeared physicist. No data was reported.

Leonardo Sciascia even wrote “The Disappearance of Majorana” novel, where he assumed that the scientist had voluntarily retired to the Cartesian monastery Serra San Bruno. The other hypothesis claims that Majorana left for Germany to serve under the National-Socialist Party and then took refuge in Argentina after the war. Many people supported the version of suicide committed out of fear induced by new findings in nuclear energetics. 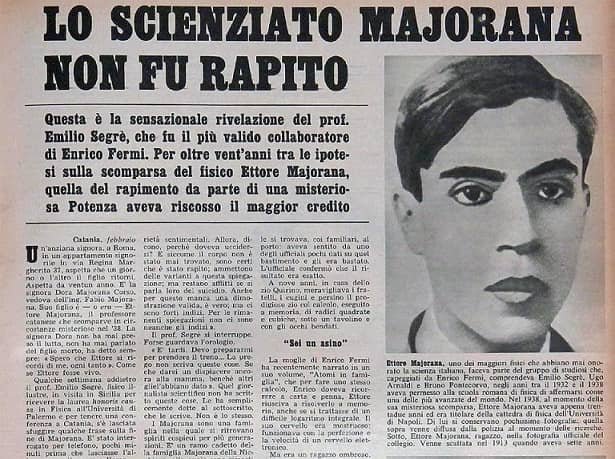 The 1959 Italian newspaper article about the disappeared physicist, photo WEB

A physicist Amaldy commented: “This man, who managed to find excellent answers to natural mysteries, was fruitlessly trying to find a justification for his life…”

And there’s the most recent version ― not a murder or suicide, but a voluntary disappearance. In 2008 a TV show featured a photo of a disappeared physicist accompanied by Francesco Fazani, a mechanic of Italian origin. The shot was taken in 1955 in Venezuela. Lengthy investigations (among others, by a scientific department of the Italian police) have concluded that between 1955 and 1959 the researcher was alive and stayed in Venezuela.

However, it is still a mystery why he was hiding in the South America. What was the further life of one of the greatest scientists in history? The answers to these questions are still unknown, and a story of a disappeared physicist became a source of inspiration for authors and scriptwriters. It has even used as a basis for the opera, which will be for the first time showed across the Northern Italian towns this fall.

Meanwhile, instead of chasing the scientist’s past, physicists are pursuing “Majorana’s neutrino”. In April, 2017 the Italian nuclear physics laboratory in Gran Sasso carried out experiments designed to prove the existence of “Majorana’s neutrino” particles. These experiments should help throw more light on the problem of matter and antimatter in the Universe. The first results of the research published in scientific journals look very promising.