On March 29th, 2017 at the top of Monte Generoso the world-famous architect Mario Botta held a grand opening of the panoramic Stone Flower restaurant.

From the top of Monte Generoso a breathtaking panorama lies open in front of a traveler’s eyes: the Canton of Ticino and Northern Italy ―  from the Apennines to the Alps, towns, lakes, and snow-capped peaks. This delightful view is rightfully regarded as one of the most picturesque sights of not onlythe Canton of Ticino, but also the whole Switzerland. You can reach the top on foot, but it's a long and difficult journey, because the mountain is 1704 m high, and the slopes are by no means gentle. The second option is a special narrow-gauge train that departs from the village of Capolago located near Mendrisio. 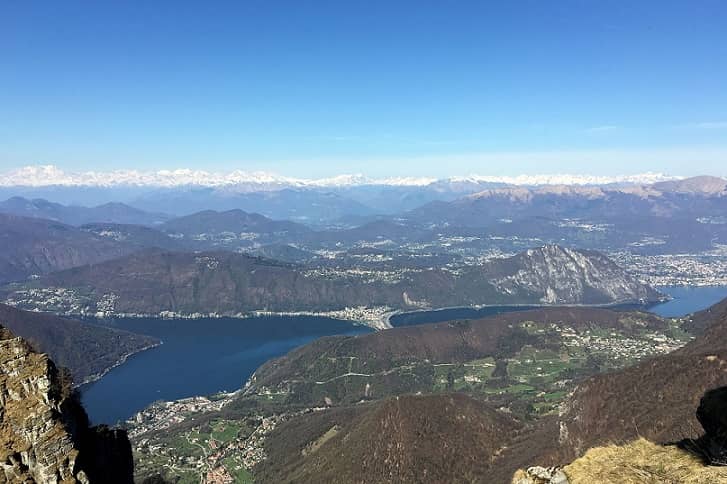 Breathtaking panorama opens up from the top of Monte Generoso, foto © Giulia Cassoni

The history of this railway is amazing. Until the end of the 18th century people avoided climbing the Alps; superstitious local people believed that evil spirits lived there. However, at the beginning of the 19th century, British intellectuals, romantics and travelers boldly paved the way for the conquest of the alpine peaks, entailing an actual "tourism boom" in the mountainous regions of Switzerland. It led to the construction of numerous Alpine hotels, including the hotel Bellavista. It was opened in 1867 on the top of Monte Generoso, although it was only possible to reach the hotel on foot or riding a donkey, and not everyone liked it.

On January 19th, 1889 the construction of the railway  was initiated, and it took a mere 16 months to complete it! The road was built virtually by hand ― with pickaxes and dynamite. The outbreak of the Second World War caused the Swiss tourist business to dwindle, so the road was closed. The owner even decided to dismantle and sell the iron rails, but Gottlieb Duttweiler, the founder of the Migros Swiss retail network, did not let it happen. Without a second thought he bought the railway in 1941, and since then the road has been the property of the company he had founded. 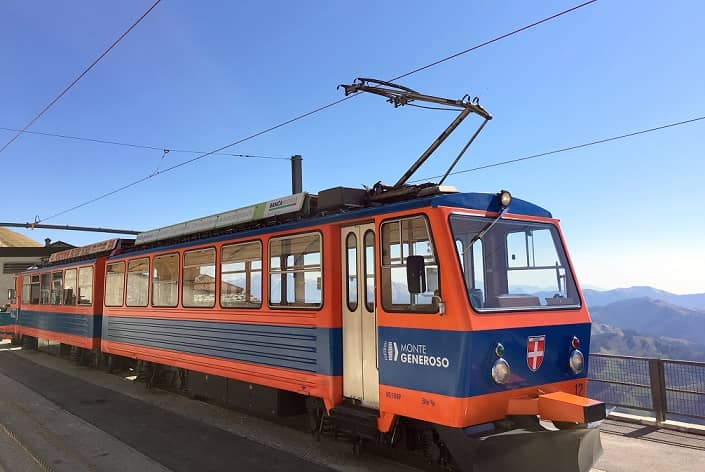 You can get to the top by a special narrow-gauge train, which departs from the village of Capolago, foto © Giulia Cassoni

And in the 21st century a new extraordinary project stands completed ― Stone Flower Restaurant. Stone flower is erected upon an octagonal base of reinforced concrete, the central room is framed by "petals", which are platedwith gray granite on the outside. Separate tower-petals are bridged with glass galleries, which offer a 360-degree panoramic view: in the South you can see Milan, in the North ― Lake Lugano and the Alps. "We are convinced that the Swiss and tourists from around the world will appreciate this new Ticino emblem," said Fabrice Zumbrunnen, the head of the staff, culture and tourism department at the Migros cooperative society.

Mario Bott, the architect, believes that the building carries the symbolic meaning a man standing on the mountainous border between Europe and the Mediterranean, between heaven and earth. "This is a magical mountain because it separates the South: the valley of the river Po, Milan and the almost perceptible breath of the sea from the other, Northern side, which feels as a part of Europe," Mario Botta said during the opening ceremony. "We are on a ridge that divides the two cultures ..." 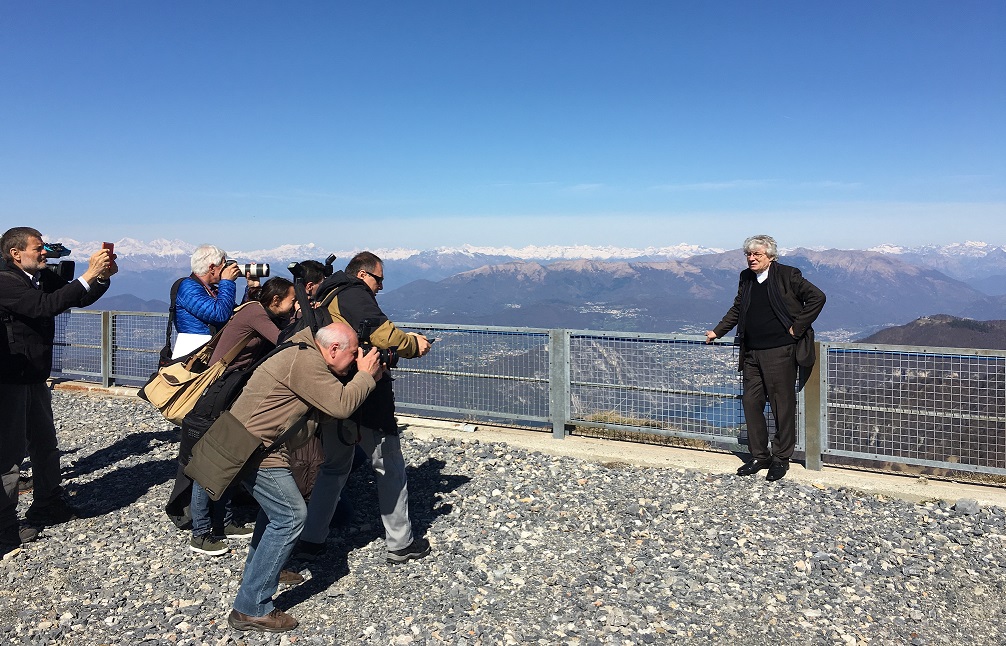 March 29, 2017 at the top of Monte Generoso, architect Mario Botta tells reporters about his concept of the "Stone Flower", foto © Giulia Cassoni

Stone Flower, erected by the Swiss architect, houses a gourmet restaurant. Its chef is Luca Bassan from Italy who has been awarded with the Michelin Star. His light and delicious dishes are always elegantly served. He prefers to use seasonal and local ingredients like the famous cheese from the valley of Magia. And the Italian-Swiss sommelier Paolo Basso, the winner of the Best Sommelier of the World 2013 and the Best Sommelier of Europe 2010 titles, offers an excellent selection of famous Swiss wines, including Merlot from the Canton of Ticino.

The chef of the gourmet restaurant in the "Stone Flower" - Italian Luca Bassan, the owner of the Michelin star, foto WEB

But let us not discuss the restaurant any further, it's better to come and try everything in person. Besides, there is so much to explore beyond the restaurant! And there are not only stone flowers on the mountain. This area is one of the most interesting places in Ticino for botanical observations, because during the latest Ice Age the mountain top was an isle rising above the vast frozen ocean.

That is why so many species of plants and animals have found shelter here. The mountain helped them to survive the difficult conditions and maybe that’s why it bears the name of "Generoza", which means "generous." Limestone layers of the mountain contributed to the development of more than 800 species of plants, some of them are very rare. By the way, it is prohibited to pluck flowers on the mountain, and rightfully so – the nature must be protected!