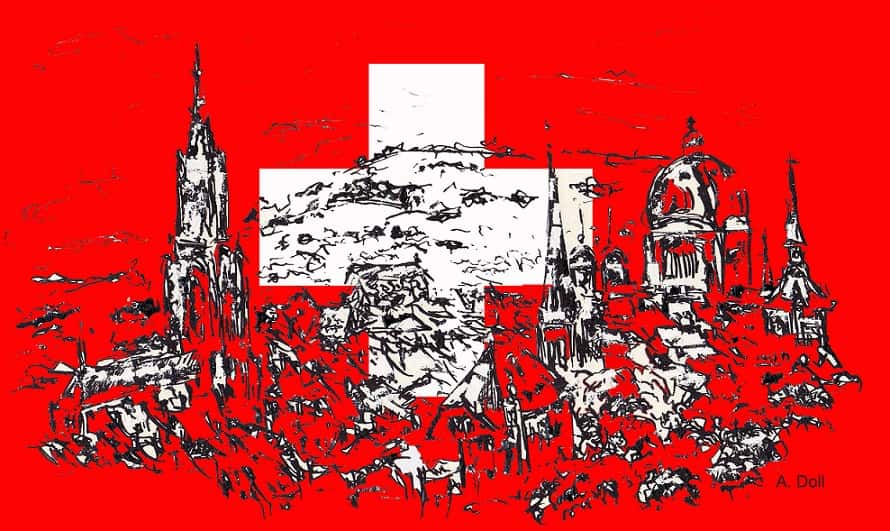 Bern – the capital of the Swiss Confederation – is situated almost in the center of Europe, and its Old City is included into the UNESCO List of World Heritage Sites. Naturally, its sights and cultural life can be best described by a creative person.

That is why we asked artist Alex Doll, a member of the Youth Counsel and an honorary member of the Russian Academy of Arts, who graduated from the Bern School of Arts drawing department, to show us around this unique city.

– Alex, what were your first impressions of Bern?

They say that first impressions are usually deceptive, but not of the Swiss capital! Once I arrived into this ancient city, I found myself in the atmosphere of seething slow-paced life. How can slow-paced life be seething? One would call it a mismatch! But I perceive the city just like that, and I'll explain why. In Bern, which is the country's political and diplomatical center, you can often hear the four official languages of Switzerland: German, French, Italian and, occasionally, Rhaeto-Romanic. Such a mixture was inconceivable for me, it blows your mind. But the locals are okay with it, they understand each other perfectly. The life here is actually slow-paced, the Swiss do not hurry. Everything is scheduled, everything happens in its own time. It is not a coincidence that the symbol of this city is the Zytglogge, the Clock Tower. 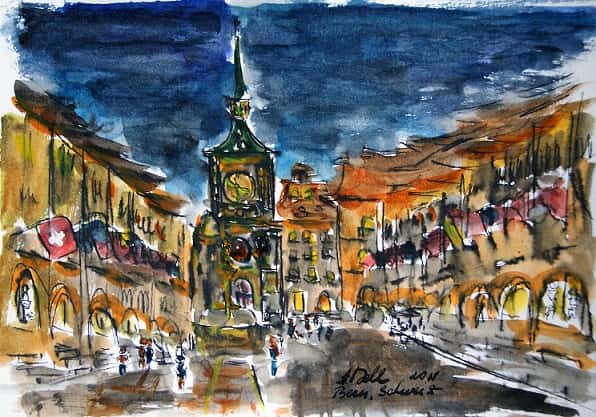 Of course, the first, the second and even the hundredth visit leaves an unforgettable impression: a breathtaking panoramic view from the observation deck behind the administrative buildings ensemble. Alpine mountain peaks inspire a romantic mood, and you succumb to nature's charms. Just imagine, how such sceneries would influence a creative person! Tiled house roofs and vistas opening from the cathedral's viewing platform are nothing short of overwhelming. Now you can see why I fell in love with this city once and for all, and why it led me to create the Swiss Vision series of paintings.

– Give us some details about your first exhibition project...

This project has almost become legendary for me, a foundation for my other creative plans. For this series I chose a medium, which I still use now. Oil on canvass! This medium offers incredible diversity of painting techniques, beautiful and vivid paint colors, flexibility and freedom to experiment. The Swiss Vision exhibition series included 100 works, and all the paintings were devored to Switzerland: urban vistas, plein-air paintings, landscapes, mountains, people. 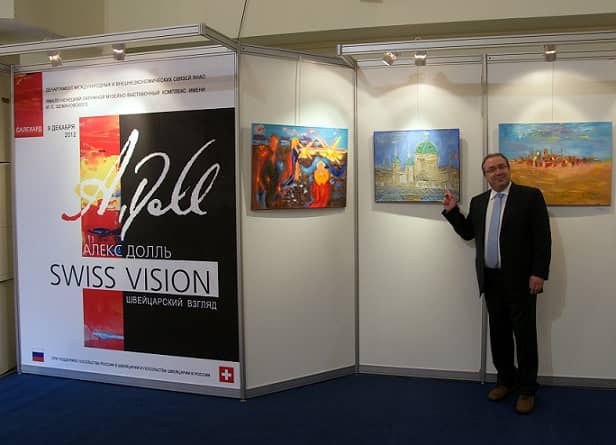 It was my first big accomplishment, and I'm very happy about it. The Swiss Vision project was displayed in museums and galleries of Switzerland, Russia, Italy, Germany, Liechtenstein. And the major theme that revealed Switzerland in this series of paintings was, of course, the city of Bern.

A. Doll's works of the Swiss Vision series, photo WEB

It was easy for me to paint it from the very beginning. I've studied all the streets, yards, river bends and paths in its parks... And the most important thing for me as an artist is that I've drawn inspiration from Bern – and I still do, even now!

–What have you learned while living in this city?

Bern taught me to paint; apart fro that, it helped me to feel and to love the beauty of nature and the past. Being very young at the time – I was merely 17 – I wandered around the city and showed my paintings to gallery owners. That's how I grew as an artist. Here I realized myself as an artist. I was extremely happy when local audience appreciated and recognized my works... It is priceless! Bern gave me art education, it literally brought me up. Now I have two Motherlands: the first is Russia by birth, the second is the Swiss capital where I live at moment.

– What is the difference in studying painting in Russia and in Switzerland?

Ultimately, the basics of art education are the same everywhere. I think, it's the clasical school of painting: color, decorative and applied art basics, portrait, anatomy... The subjects taught by professors in Russia and Switzerland perhaps only differ by freedom to select technical means and materials. And yes, according to my experience, Swiss tutors never act as mentors; they’ll never teach you how to live.

- Do you plan for any new exhibition projects devoted to Switzerland?

Yes, unconditionally so; but this is a great secret and a surprise for the year 2018!  Currently, I actively work together with one of the most popular and beautiful museums in Switzerland – the Swissminiatur. Soon enough, exclusively for this museum I will start to decorate exhibits devoted to the Year of Ecology. They will be miniatures conveying informationassociated with the global ecological situation. 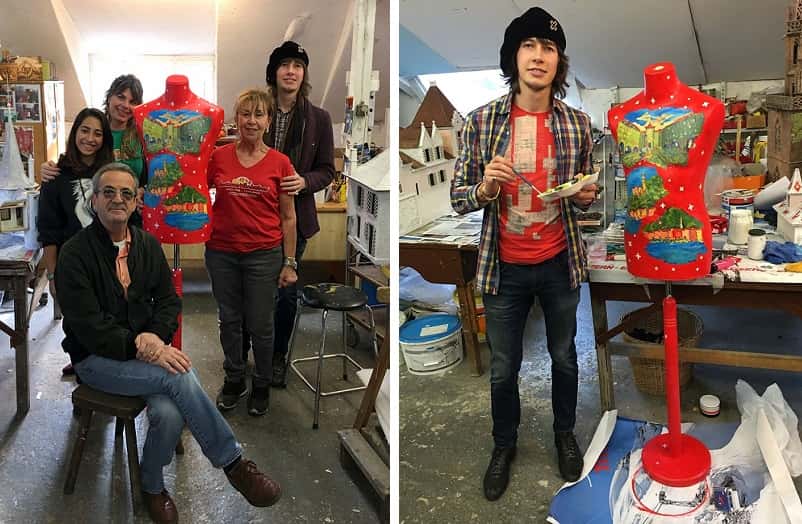 - Please tell us about the cultural life of the Swiss capital.

The cultural life in the capital is as rapid as the deep mountain Aare River that encircles the Old City! Unconditionally, its center is the Bern Art Museum – the Kunstmuseum. It sets both exhibition trends and cultural life rhythm. The collection of this museum is very rich. By the way, it has been recently complemented with several paintings of "degenerate art", which Adolf Hitler hated so much! Modern Masters: “Degenerate” Art exhibition became one of the Europe's brightest cultural events! I was very glad to see the unique artworks of the early 20th century. Moreover, every week new exhibitions are opened in Bern: in the Paul Klee Museum, History Museum, Einstein Museum and in the galleries of the Old City.

Ernst Ludwig Kirchner, Sunday in the Alps. Scene at the Well, 1925, photo WEB

- Are there Bohemians in Switzerland?

Of course, there are. All over the country, but especially in Basel, Ticino, Lucerne, Lausanne and Zürich. These cities and cantons host the most prominent cultural events of the country: various festivals, expositions, concerts, literary soirées, performances. Switzerland is rich in talents and, as you know, this country for ages served as a refuge for many geniuses and cultural figures, such as Vladimir Nabokov, Sergei Rachmaninoff, Coco Chanel, Freddy Mercury... this list is much longer. And the country gave birth to so many creators! Alberto Jacometti is utterly magnificent!

- And several brief hints for Bern guests – what would you advise to visit in this strange city?

Hundreds of tourist routes are designed for the city! Take any! If someone wants spend some time alone in the open air, you are welcome to take a walk along the Aare River. Achitecture enthusiasts will like the Old City, where Roman elements are mixed with Gothic features. For intellectuals, as I've mentioned, there is a plethora of museums, and of course you shouldn't forget the night city life! And the most popular tourist attractions are Bear Pit with real bears – the city symbol –living there; Bern Cathedral, a square with fountain (don't forget to take a photo of the famous Child Eater), Bundeshaus, Zytglogge... Everything is worth visiting! 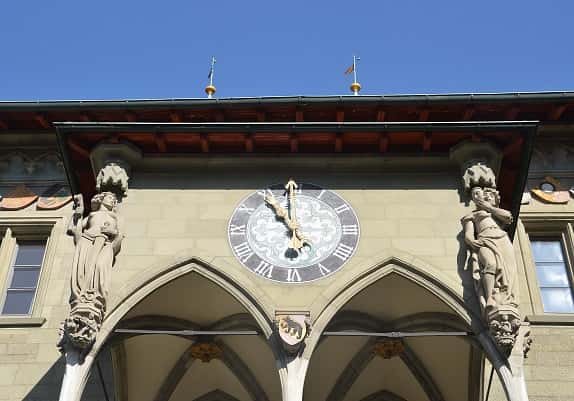 Bern, a facade of a building © Giulia Ilina

In Bern I recommend to try a typical Swiss potato dish röschti. It is served everywhere, but this dish is especially delicious at the restaurant near the Child Eater fountain. Potatoes are not only fried in a special way, they are served with a fried egg and bacon on top! It is very tasty! You have to remember that Switzerland is the country of cheese, so Swiss cheese fondue in a town of Gruer near Bern is also very-very­ tasty! I have several favorite dishes, considering that I not only like to eat, but also cook with pleasure! 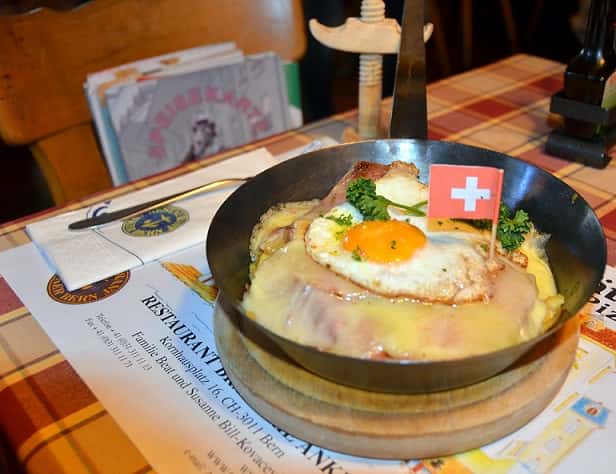 There are two and both holidays are especially beautiful! The first holiday is the Swiss Nationad Day celebrated on the 1st of August, the second one is Berner Fasnacht, a counterpart to Russian Maslenitsa! 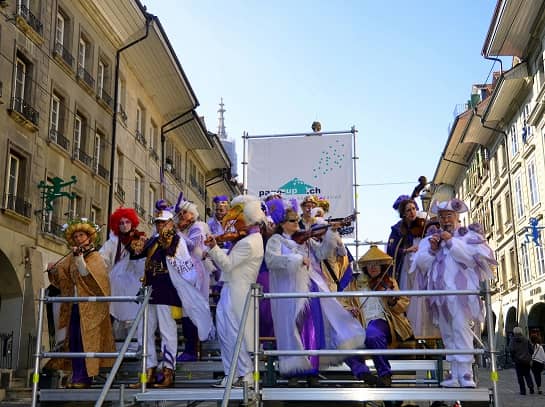 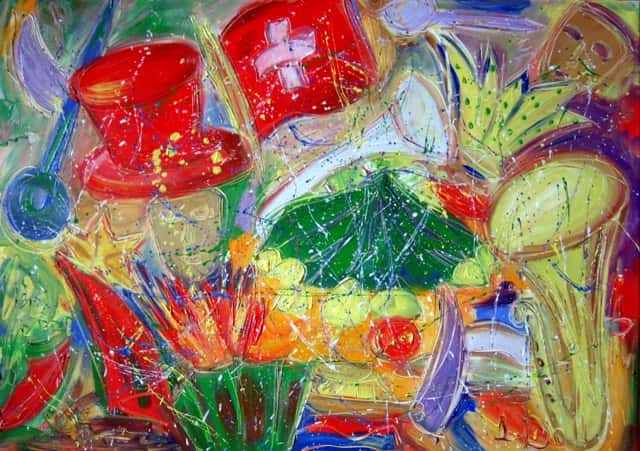 Personally I adore the second one! All the city is sprinkled with confetti, people are wearing bright garments, smiles and music are everywhere, numerous folk bands, costume shows. Joy and happiness are everywhere – a true holiday.

- How would you characterize Bern in three words?