The name of Jeanne Toussaint is less known than the big name Cartier, however, the legendary House owes its success to this woman. She was called the Cartier Doom Panther, because the famous Panther jewelry made of onyx, coral, gold and precious stones are the fruits of her painstaking work and restless imagination.

A century has passed, styles and techniques have changed, but the graceful cat Toussaint was stronger than circumstances and above all the vagaries of fashion. King of Great Britain Edward VII called Cartier the jeweler of kings and the king of jewelers. And the stately and impudent Jeanne Toussaint was his closest assistant, the muse, and later the creative director of the House. 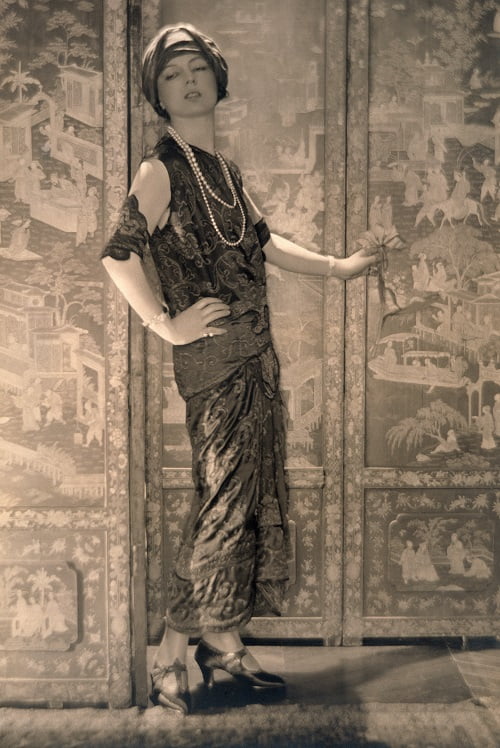 Fleeing the harassment of her stepfather, at the age of 13 she fled from Belgium to Paris, where she easily got accustomed in a bohemian environment and soon met the artist George Barbier. Louis Cartier ordered from him the poster for the presentation of the Panthère de Cartier watch in 1914, which eventually marked the beginning of the era of the legendary spotted line. The onyx and diamond watch ornament created an abstract pattern imitating panther fur - not a geometric pattern, but an interpretation of spots on a cat's skin.

The original Panthère de Cartier watches required special presentation to the discerning public, and Barbier tried his best - depicted on the poster a young cocotte Jeanne with a long pearl thread on her neck, and painted a resting panther at her feet ... The picture was so amazing that Louis could not resist - fell in love to a spotted cat and, of course, to Jeanne. 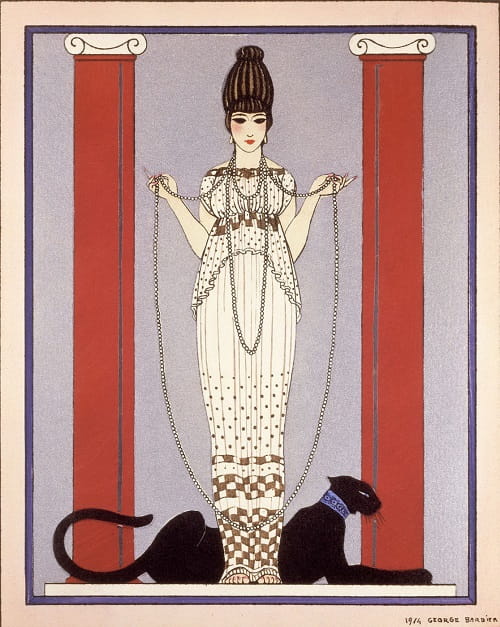 In 1916, Toussaint headed the accessories department at Cartier, and through her efforts the cat crept into all the products of the House, from bracelets and brooches to watches and necklaces. In 1917, Louis in love presented to his Little Panther with a platinum cigarette case, decorated with a scattering of diamonds and onyx, on which a figurative image of a spotted predator first appeared.

Soon, brooches with similar coral motifs with precious stones and black enamel imitating spots were created, and in the 30s the House introduced Panthère de Cartier ring in the form of two golden panthers holding a star-shaped ruby with its paws. This was the first three-dimensional image of a cat. 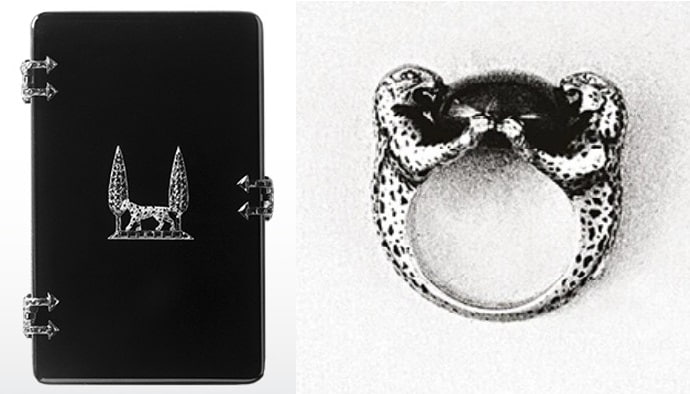 In 1948, the world saw a unique platinum brooch in the shape of a panther, which rests its paws on a stunning sapphire cabochon of 150 carats - Toussaint invented this “trinket” for a friend of the Duchess of Windsor. A few months later, a second jewelry appeared for the duke's wife - a platinum cat on raw sapphire.

Brooch in the form of a crouching panther of onyx and diamond completed the jewelry trilogy. Interestingly, this little thing in 2010 was at an auction where it was estimated at 5.5 million euros. Madonna was going to buy Panthère de Cartier . 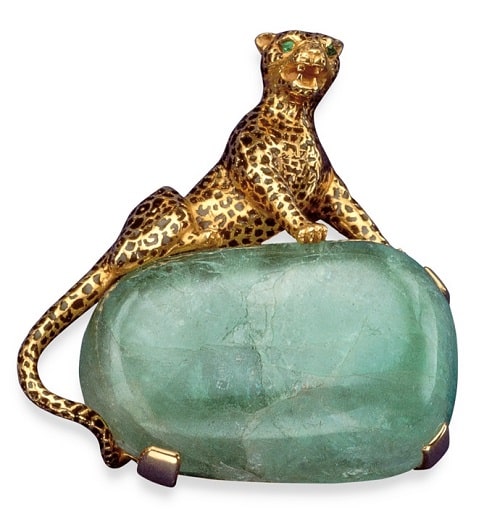 Brooch Cartier created for the Duchess of Windsor, photo © elle.ru

For the first time, earrings in the shape of a cat's head, studded with diamonds, sapphires and emeralds, the Cartier house made in 1958 at the request of Prince Sadruddin Aga Khan. For him, the first transforming brooch with moving paws and a head was created, as well as swivel bracelet with two heads looking at each other. In addition to the prince, loyal cat fans were Elizabeth Taylor, Grace Kelly, Barbara Hatton, Coco Chanel and Jeanne Lanvin ...

Thanks to the latter, the panther first "crouched" on the temples of glasses. The "skin" of the predator of white gold was decorated with dark ("wild") and white diamonds, and sapphires replaced her eyes. With these glasses, Lanvin looked like a true queen, which caused genuine envy of Coco Chanel, who still wore a lorgnette. 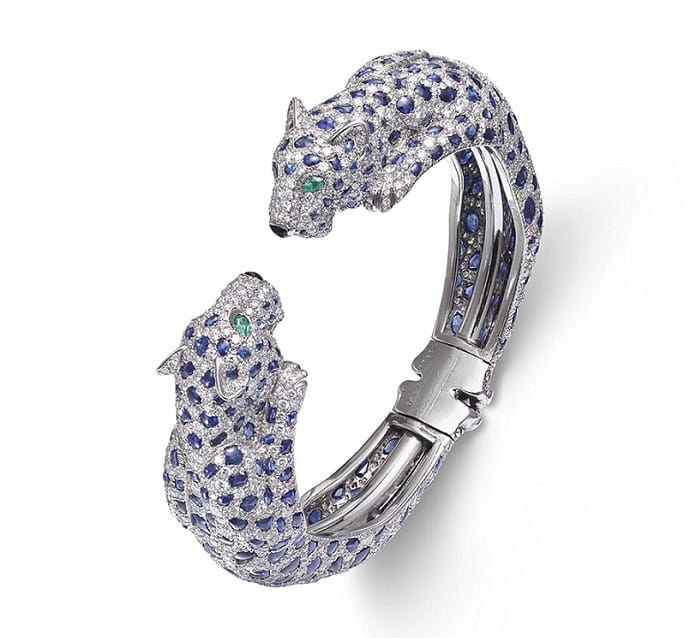 Swivel bracelet with two heads looking at each other, 1958, photo © watchesbysjx.com

In 2014, to the centenary of the spotted line, Cartier launched the new Panthère de Cartier collection and signature fragrance. A stunning series of 56 jewelry and La Panthere perfumes reflected the graceful interweaving of the past with the present, and each item seemed to contain the energy of a wild cat and the soul of Jeanne Toussaint herself, the Doom Panther of the Cartier House.

Over the past years, jewelers have captured a predator in a variety of situations - either it sneaks behind the victim, or quickly pursues prey, or rests on a warm stone, or even plays with its tail ... So the creations of the Cartier masters have been revealing for over a century by the imperious and at the same time playful wild cat character. 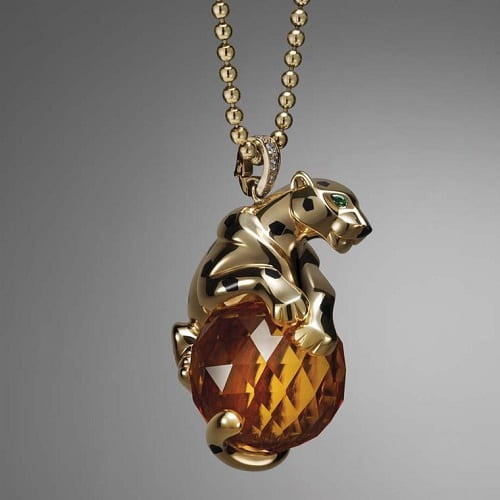 Dozens of years have passed, and today the design of PANTHERE DE CARTIER is a combination of contrasts. Smooth or sharp, straight or rounded, realistic or abstract, but always restrained, stylish and modern, it reflects the rich experience of the Cartier House and its invariable ideas about elegance. 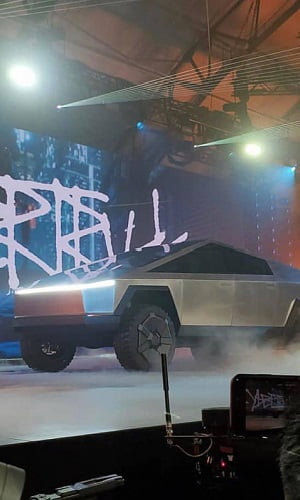 Tesla Cybertruck: design and specifications of the most controversial electric car from Ilon Mask